The name "VJ Day" (Victory over Japan) is applied to August 15-16 because of a huge two-day worldwide celebration that took place after the Empire of Japan announced it was surrendering - thus ending World War II. The holiday is also referred to as "Victory in the Pacific," or VP Day, in Australia where it is celebrated each August 16. However, the official formal surrender didn't take place until September 2, 1945, in Tokyo Bay. This happened aboard the USS Missouri when the official surrender papers were signed. Historians and Vexillologists recognize technically this as the date of the official end of World War II.
This simple red "V" on a Navy blue-fielded flag was released to celebrate the historic event. On the hoist line of the flags it stated they were made at Mare Island in 1944. Gunner's Mate Chief David "Tim" Lake, who served on the Battleship Pennsylvania (BB-38) from 1941 through 1946, still has one of the original flags. The warship, nicknamed the "Pennsy" was flagship of the Pacific Fleet for much of the war. Chief Lake remembers this flag being flown when the ship returned to the states after the war. Retired Quartermasters Chief Walter Dougherty, another World War II vet, related to Lake that the flag had been approved by President Roosevelt, distributed in 1944, to be flown by all Navy units and bases on the day Japan surrendered. (source)
Pete Loeser, 2 September 2019

The device on this flag is the lapel pin presented at the end of World War II to all who served in the armed forces during the war. It was known jokingly as the "ruptured duck" by its recipients. IIRC, the original badge had a stars and stripes design on the circlet.
Joe McMillan, 19 March 2002

This design uses the World War II Victory medal and ribbon as its inspiration. The Victory medals were presented to all who served in the armed forces during World War II. This flag was released to honor those veterans.
Pete Loeser, 9 September 2019

The Korean veterans flag, has eight stars, equal to the number of streamers (less UN operations) in that war.
Nathan Lamm, 10 December 2001

This is from the official KW50 site, hosted by the DoD:

"The 50th Anniversary of the Korean War Commemoration Flag is symbolic of the unified effort of the United States, the Republic of Korea and our allies to stop Communist aggression on the Korean Peninsula 50 years ago. The light blue and white streamer that runs through the center of the flag is the U.N. Battle Streamer. The 22 stars represent the 22 allied nations that fought side-by-side to save South Korea. The words "Freedom is not Free" were added by our Veterans who, more than anyone else, know the great price of liberty. The flag is in both the English and Korean (Hangul) languages. In the center is the "Tae Guk" symbol from the South Korean flag, familiar to many as the symbol for the philosophy of Yin and Yang. In Korea, known as Eum and Yang, the symbol stands for peace and harmony. South Korea has adopted this as their official Commemoration Flag. The Institute of Heraldry assisted the 50th Anniversary of the Korean War Commemoration Committee with the design of the flag.

It is the goal of the Committee to see this flag flying in Commemoration Communities across the Nation to honor and thank the veterans of the Korean War, their families and most of all, those who lost loved ones."

Vietnam Veterans flag is yellow (based on the flag of South Vietnam), with the symbol of the Vietnam Veterans of America, enclosed in a wreath, at the fly, complete with a R-in-a-circle registered trademark beside it. The symbol can be seen at http://www.vva.org/ (subtract the R symbol, I guess, as it's alongside here). The central design is the Vietnam service medal ribbon, based on the South Vietnam flag. Most curiously, the flag had seventeen black stars alongside the hoist, arranged in vertical columns of  6-5-6 (as far as I could make out).
Nathan Lamm, 10 December 2001

Seventeen stars because the US military divides its involvement in Vietnam into 17 campaigns, which are reflected in the seventeen Vietnam campaign streamers on the Army and Air Force flags and the three silver and two bronze stars on the single Vietnam campaign streamers carried by the Navy and Marine Corps. I'd say there's a pretty good chance that the 17 stars on this flag represent the same thing.
Joe McMillan, 10 December 2001

I drove by our local golf course and observed that there was a golf tournament taking place for Vietnam veterans. This flag was flying in front of the clubhouse below the US flag. Both flags were 3x5 feet.

The badges are the shoulder patches of the following US Army Divisions (starting from the "Big Red One" on the top and going clockwise):

I served in the Army from 1963 to 1985 and am the designer of the flag. My friends and I realized that when Vietnam Veterans returned home they did not receive their "honor," but instead were met by demonstration and derision. In the tradition of the Native Americans a returning warrior could be presented with an Eagle feather to honor their service. It occurred to us that this was lacking for the Vietnam era. Thus the Eagle feather superimposed on the Vietnam service ribbon was created. The feather design was drawn by my daughter and I did the graphic work. We first printed the flag nearly 20 years ago and have watched it proudly fly at many Pow-wows and Veterans gatherings. The meaning of the flag is never lost to me and hopefully not to others who may view it.

There were two versions of our flag as we changed silk screens after the first run. The feather is from my daughters design without a doubt.
Chuck Cline, 1 May 2010 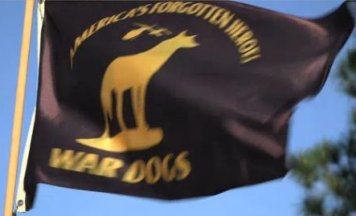 In this National Geographic video at 0:16, there's a a black horizontal flag displaying a dog (most likely a German Shepherd) and a helicopter and an aircraft in the background, with the title "AMERICA's FORGOTTEN WAR HEROES" in capital yellow letters, and below "WAR DOGS" in capital yellow letters. It seems it is a commemorative flag honoring the War dogs sent during the Vietnam War by the United States.
Esteban Rivera, 2 July 2014

There are several veteran groups working to get recognition for our service "War Dogs" and their handlers. They have thus far been successful mainly at the state level, but are actively fund raising to establish more memorials for these forgotten heroes and their service.
One such group in Columbia, South Carolina, has been led by a Vietnam veteran Johnny Mayo. Mayo was an Army dog handler in Vietnam. He and his scout dog Tiger were searching for snipers or ambushes in the jungles of the central highlands of South Vietnam on October 16, 1970. Tiger was off leash, about 35 feet ahead of Mayo, when he hit a trip wire. Tiger sadly died from his wounds, but he saved Mayo's life and the soldiers of the 173rd Airborne Brigade following behind him. Tiger is an example of these brave animals who live and die unrecognized for their brave service.
In 2017, Mayo efforts led to having a Vietnam War Dog memorial built and dedicated at the S.C. Memorial Park in Columbia. These flags were long a part of the fund raising efforts dating back to the early 2010s. They show a stylized silhouette of a German Shepard with two combat helicopters flying overhead. The words "America's Forgotten Heroes" arch over the image in golden text and "War Dogs" appears underneath. A variant version of the flag shows all in silver on a black background. (source: America's Forgotten Heroes Flags 2017)
Pete Loeser, 5 June 2019

Lest They Be Forgotten flag

The "Lest they be Forgotten" foundation was the result of the desire of a Florida father named Gregg Garvey to honor his fallen son who died in Iraq, and to help honor all those killed in the War against Terrorism. The foundation was set up to help establish memorials in towns throughout the United States to those soldiers and patriots who have given their lives during Operation Enduring Freedom, in Iraq, in Afghanistan, and in the War against Terrorism. The flag is designed to be flown under the Stars and Stripes over these monuments. The "Lest they be Forgotten" Flag was first unveiled in 2007. From www.lesttheybeforgotten.org/howitstarted.htm.
Pete Loeser, 3 February 2012

"Flying under Old Glory at Michigan's Own Military and Space Museum in Frankenmuth today is a flag most Americans probably won't recognize.
A gold star outlined in blue floats on a field of white, with red and black vertical strips on either side. It's the Patriot Flag, a banner that John Carlisle Jr. of Mount Morris Township in Genesee County designed to honor every citizen who has given his or her life for the U.S. in military service and to show support for their families.
Proceeds from the sale of the flag is for veterans organizations "that help the families of 'fallen patriots' or veterans in need."
Source: www.mlive.com.
Steve Shumaker, 15 June 2009

The attack on Pearl Harbor was a sneak military attack by Imperial Japan on the United States Pacific Fleet stationed at the naval base in Honolulu, Hawaii on Sunday morning, December 7, 1941. The day after the attack, President Roosevelt delivered his famous Infamy Speech to a Joint Session of Congress, calling for a formal declaration of war on the Empire of Japan. On December 11, Germany and Italy declared war on the United States, Congress then issued a declaration of war against Germany and Italy later that same day. Twenty-one United States war ships were damaged or lost in the attack, all were repaired but three and were returned to service. Approximately 2,335 Americans died in the attack, and 1,143 more were wounded. World War II had officially begun for the United States.
This flag commemorates the 75th Anniverary of the attack.
Pete Loeser, 7 September 2019

On June 6, 1944, the D-Day invasion took place in Normandy. It is considered the largest amphibious assault in history and one which many historians consider the turning point of World War II. During the planning stages Operation Overlord was the code name used for the upcoming landing on the beaches of Normandy. This Allied operation would launch the invasion of German-occupied Western Europe. The actual invasion was called Operation Neptune, or simply D-Day. Operation Neptune was the cross-Channel phase of Operation Overlord under the command of Admiral Bertram Ramsey, but the Supreme Allied Military Commander was General Dwight Eisenhower.
On June 6 the successful, but hotly contested, Normandy landings took place on Utah Beach, Pointe du Hoc, Omaha Beach, Gold Beach, Juno Beach, and Sword Beach. More than 1,200 planes, 5,000 vessels and nearly 160,000 troops crossed the English Channel on that day, and by the end of August over two million Allied troops were in France heading for Germany.
There is no official casualty figure for D-Day, but over 425,000 Allied and German troops were killed, wounded or went missing during the whole battle for Normandy. So far they have verified 2,499 American D-Day fatalities, 1,915 from the other Allied nations, for a total of 4,414 dead. The total German casualties on D-Day are not known, but are estimated as being between 4000 and 9000 men.
The D-Day invasion took place exactly 75 years ago and this special flag commemorates and honors those, both living and deceased, who took part in the &quotGreat Crusade" as Eisenhower coined it.
Pete Loeser, 6 June 2019