United States Northern Command (USNORTHCOM, or informally just NORTHCOM) is a Unified Combatant Command of the United States military. Created on October 1, 2002 in the aftermath of the September 11, 2001 attacks, its mission is to protect the United States homeland and support local, state, and federal authorities. The support that USNORTHCOM provides to civil authorities is limited by the Posse Comitatus Act which limits the role of the U.S. military in civil law enforcement.

USNORTHCOM's Area of Responsibility (AOR) includes air, land and sea approaches and encompasses the contiguous United States, Alaska, Canada, Mexico and the surrounding water out to approximately 500 nautical miles (930 km). It also includes the Gulf of Mexico, the Straits of Florida, portions of the Caribbean region to include The Bahamas, Puerto Rico, and the U.S. Virgin Islands.

JFHQ National Capital Region is a subordinate unit of US Northern Command at Fort McNair, DC that is responsible for homeland security in the Washington, DC area.

Flag has a white field with gold fringe and unit emblem in center.

JTF Civil Support is a subordinate unit of US Northern Command at JB Langley-Eustis, VA. It provides a response capability for chemical, biological, radiological and nuclear attacks in North America.

Flag is gold, with a gold fringe, and with unit emblem in the center.

JTF North is a subordinate element of US Northern Command at Fort Bliss, TX that conducts counter-drug and antiterrorism operations in North America.

The flag can be seen in this images: http://www.jtfn.northcom.mil/subpages/articles/stammer_sm.jpg

Flag has a white field, and curiously, a purple fringe. Unit emblem is in the center above a purple scroll with a motto in white lettering "Service to the Nation"

This is a now-defunct organization that was subordinate to US Northern Command from 2002 until approximately 2006-07, when it was discontinued.

The only flag image I could find was this: http://www.defense.gov/DODCMSShare/NewsStoryPhoto/2004-04/2004040112a_hr.jpg - a white field with gold fringe, unit emblem in the center. Unfortunately, I could not find a complete image of the emblem.
Dave Fowler, 30 August 2013 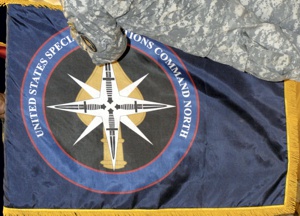