Nation of Gods and Earths 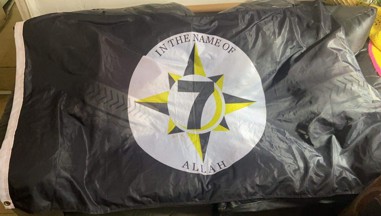 The black-field flag of the "Five-Percent Nation" or "Nation of Gods and Earths" or the "Five Percenters" with its logo in the center; c. Sept. 2022.

[from Wikipedia]: "The Five-Percent Nation, sometimes referred to as the Nation of Gods and Earths (NGE/NOGE) or the Five Percenters, is a Black nationalism movement influenced by Islam that was founded in 1964 in the Harlem section of the borough of Manhattan, New York City, by Allah the Father, who was previously known as Clarence 13X and, before that, Clarence Edward Smith. Members of the group call themselves "Allah's Five Percenters", which reflects the concept that ten percent of the people in the world are Elite and their agents, who know the truth of existence and opt to keep eighty-five percent of the world in ignorance and under their controlling thumb; the remaining five percent are those who know the truth and are determined to enlighten the eighty-five percent. The Nation of Gods and Earths was founded by Clarence_13X after he left the "Nation of Islam".
https://en.wikipedia.org/wiki/Five-Percent_Nation
Bill Garrison, 12 September 2022