The flag of the Alaskan Independence Party (AIP) is a gray field bearing a centered circle with a black bear, eight yellow stars, and the name of the organization above the disk."
Chrystian Kretowicz, 26 March 2009 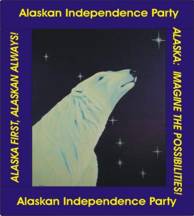 image by Edward A. Vazquez

This is the new flag that's now being used by the Alaskan Independence Party. I don't know if it's actually waved from a flag pole. When I was last in Alaska, I only saw a hand-painted model on cardboard. I was told by the party members, though, that it was COMPLETELY REPLACING the old design.
Edward A. Vazquez, 10 December 2002