In 1891, one star was added, representing Wyoming, bringing the total number of stars to 44. There were thirteen stripes representing the thirteen original colonies.
Rick Wyatt, 5 April 1998

From the stamp:
Using their First Amendment rights, Americans have enthusiastically pursued religious, social, and political goals and modified the flag to show commitment to country and cause. Dedication to world peace was once symbolized by this flag.
Rick Wyatt, 18 July 2001

Seen on the famous black and white photograph (original in the National Archives, Washington) by one of five of Peary's companions holding staff-mounted flags on an ice hill--blocks piled up by a pressure ridge--at the pole. The variant carries the text "Peace among all Nations."
Joe McMillan, 2 January 2004 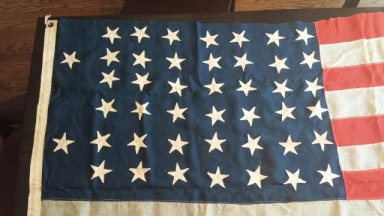 I was sent this image of a flag which was handed down from their grandparents. It is an usual pattern with the number 6 hand written near the grommet.
Albert S. Kirsch