10:19 image(s) by permission of David B. Martucci
image(s) from American City Flags, Raven 9-10 (2002-2003), courtesy of the North American Vexillological Association, which retains copyright.

Birmingham’s flag is a vertical tribar of red, white, and red stripes in proportions of 4:7:4. In the center of the white stripe is a large red five-pointed star inscribed in a circle of stars 5.5 units in diameter, on a flag with overall dimensions of 10 by 19 units. In the center of the star is the city seal in gold with black figures and lettering. The outer edge of the seal, which has seven notches somewhat like a gear (which the designer called a “hub”), extends nearly to the five inner points of the star. Along the inner notches of the gear are two concentric circles forming the traditional ring around the seal proper. Curved clockwise over the top part of the ring is ★ Official Seal ★. Curved counterclockwise in the lower part of the ring is Birmingham, Alabama, beginning at 9 o’clock and ending at 3 o’clock. In the center of the seal, its baseline bisecting it horizontally, is the skyline of the city. Radiating from the midpoint of that baseline in the lower half of the seal are eight ray-like lines, equidistant from each other. Slightly to the fly side of the seal’s center, and appearing to be in the seal’s foreground, is a statue of the Roman god Vulcan on a pedestal, facing the city skyline, his right arm upraised.

Encircling the red star are 67 tiny gold stars, pointing outwards and forming a circle. Radiating out from these stars are eighty-five gold rays, forming another circle of 6.5 units in diameter. The rays start with a longer one (one-eighth of a unit in length) at the red star’s top point and alternate long and short around the star. The shorter rays are about three-fourths the length of the longer ones.
Flag adopted: 2001 (official status uncertain).
John M. Purcell, American City Flags, Raven 9-10, 2002-2003

The seal suggests that Vulcan, Roman god of smiths and metalworkers, and hence, of industry, is bestowing his blessing upon the city. In the late 19th and early 20th centuries, Birmingham was the center of the iron and steel industry in the Southern states. The designer carefully explained the remainder of the flag’s symbolism:

The WHITE is symbolic of the purity of our women; the RED typifies the valor of our men; the GOLD hints not only of the fabulous mineral wealth of this district, but also represents the high standard of purpose and character of our citizens.

The larger RED star represents our marvelous young city; in its center is the golden official seal (with the year of our City’s birth, 1871, added to it), and surrounded by a golden “hub”, which signifies that Birmingham is considered the industrial, financial, and aerial “hub” of the South.

The GOLDEN RAYS or sunbeams depict our city’s fame and prosperity, and also suggest that ‘all roads lead to Birmingham’—ŕ la Imperial Rome.

The designer, assisted by the junior chamber of commerce, presented a flag to the city council, which adopted it.
Adoption: 15 December 1925 (official)
John M. Purcell, American City Flags, Raven 9-10, 2002-2003

In spite of the mention of the 1871 date on the seal in Mrs. Sorsby’s explanation of the symbolism, the date is sometimes omitted on depictions of the flag today. 10:19 are the same proportions as the United States flag.
John M. Purcell, American City Flags, Raven 9-10, 2002-2003

The Flag of Birmingham was created on the occasion of Birmingham's semicentennial in 1921. The flag was conceived and designed by Idyl King Sorsby, with the assistance of the Birmingham Jaycees, who created the prototypical flag, constructed in silk, and presented it to the city. The city, along with the Jaycees, presented a copy of the flag to the City of Birmingham, England, and received theirs in return in 1926."
Valentin Poposki, 21 July 2006 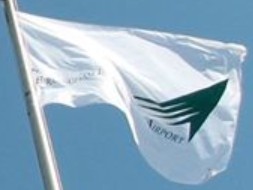