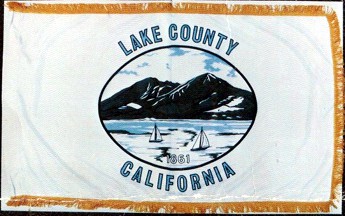 The flag of the Lake County, California, story and description:

"The first official flag of Lake County was unveiled on March 17, 1981. The design was decided by a contest held among high school students. 38 entries were submitted by seniors throughout the County. Raymond Phillips of Upper Lake High School was the winner. His design depicts Mt. Konocti with fleecy clouds in the sky and sailboats in the blue water of Clear Lake. The scene was considered most symbolic and representative of Lake County."
Photo of the flag and information thanks to Linda Lake, Curator.

The county:
"Lake County is a county located in the north central portion of California, north of the San Francisco Bay Area. It takes its name from Clear Lake, the dominant geographic feature in the county and the largest natural lake wholly within California (unlike Lake Tahoe which is partially in Nevada). As of 2000 the population was 58,309. The county seat is Lakeport." - from Wikipedia: en.wikipedia.org/wiki/Lake_County,_California.