The City of Monterey, California, USA, is located about 115 miles (184 km) south of San Francisco. Noted as a major California tourist location, it has also enjoyed an important part of early California history.

The city is on the shores of Monterey Bay, named by Sebastián Vizcaíno in 1602 in honor of Gaspar de Zuñiga y Acevedo, the fifth Conde de Monterrey, the Viceroy of New Spain. There are several different stories for why the name is spelled with a single "r" with the derivative from "Monte Rey" (mountain of the king) being one.

Chaplain Walter Colton was appointed to serve as the first American Alcalde of the city. He designed Colton Hall which served as a school and town meeting hall. The convention that decided California statehood and the signing of the first California constitution took place in Colton Hall. Now owned by the city, Colton Hall houses a museum.

The following excerpt is from the pamphlet "The Flag of the City of Monterey" provided by the Colton Hall Museum.

"The Monterey flag was officially adopted by the Monterey City Council on January 18, 1977, with the special encouragement of Mayor Peter J. Coniglio. The flag was first displayed and flown on April 19, 1977 at the opening day ceremony for the Monterey Conference Center. It was designed by Mr. Paul Mills, Director of the Santa Barbara Museum of Art.

The Monterey flag is derived from two armorial bearings connected with the City's history, one Spanish and one American, which have been combined according to heraldic principles. The first, represented in the first and fourth quarters of the flag, is the shield of the Count of Monterrey for whom the city was named in 1602. The second, represented in the second and third quarters of the flag, is based on the City Seal designed by Lieutenant Alfred Sully in 1850.

The Monterey flag has been designed in two versions. One is the ceremonial version, to be carried before the Mayor and the City Council on formal occasions and displayed in their Chamber. The other is the daily use version to be used on most other occasions and flown from out-door flagpoles. The Monterey daily use flag, which should be envisioned as flying atop a flag pole, has bold, geometric shapes. The ceremonial flag, which will be viewed more closely indoors, has embroidered upon it the several charges and the gold chain of the Zuñigas, and the sheaf of wheat and the anchor of the American seal."

Blazon by the author:
The daily use flag is quartered, first and fourth quarter argent, a bend sable. The second and third quarters vert, a bend sinister or. The ceremonial flag adds the gold chain of the Zuñigas family in the first and fourth quarters. The second and third quarters have a gold anchor in the upper left and a sheaf of wheat in the lower right.

My book has an entire chapter about the arrival of a Mexican ship in Monterey in September 1822 and the transfer of authority from Spain to Mexico and the change of flag on September 26, 1822. It was also mentioned that the Native Americans especially welcomed the change from the Spanish Coat of Arms to an American Symbol.

Source: A Brief History of Monterey, by Robert W. Reese, 1969

The flag is from Pacific House in Monterey, California. One of two in the collection, this particular flag was supposedly hauled down for the Mexican Customs House in Monterey after the arrival of the American fleet in 1846. It was preserved by a local family until donated to the museum.

It is not the first Mexican flag in California, but rather the last flag of Mexico in Monterey.

Although we assume that the first Mexican flag hoisted in Monterey was the flag of the First Mexican Empire, there is very little evidence that the flag in the First Mexican Empire was ever widely used in California, and there is no surviving example. In fact the use on both Spanish and Mexican flags in California seems to have been minimal, (i.e.: the Customs House as a matter of function so visiting ships would know where to pay their duties.)

Contemporary accounts indicate that neither the Spanish nor the Mexican troops garrisoning the various presidios made colors every morning, instead they hoisted them upon need, the arrival of a ship or a visit by an important official. They both seem the have used the plain "civil" flags on a day to day basis. In 1800 the Governor of California noted in correspondence with Madrid to please send more flags as they were out of flags!

This Pacific House Flag is the only known Mexican Government Flag in a collection in the United states. The others in Texas, North Carolina, Pennsylvania and Wisconsin are all military colors.

The flag is especially curious because it is a variant with only a sprig of olive instead of the "official" demi-wreath. Also, it like the other is in 1:3 proportions, a common proportion used by Mexico in the mid-19th venture, especially by the merchant marine.

Monterey's official historic navy ship's boats were established in a city proclamation by the city council in 1998, recognizing the permanent loan of two Russian naval yawls to be stationed in Monterey for use in programs promoting the recognition of the Russian Navy's contribution to California's history.

In 1999 one of the boats carried a delegation of City Council members out into the bay to officially greet H.M. BARK ENDEAVOUR, and because the boats are still registered Russian naval vessels, they carried the Russian Naval ensign at the stern, and the City of Monterey flag at the bow. The city council approved an ensign to be flown on the stern of the boats when the mayor, official city delegations or council members are aboard. My ensign design incorporates the flag designed for the city by Paul Mills in the canton, and placing the red anchor in a white field, hoping to recall the naval ensign of Spain's and the colors of green, white and red of the Mexican flag, and the use of a design incorporating a canton and a field in white and red as in the U.S. flag. 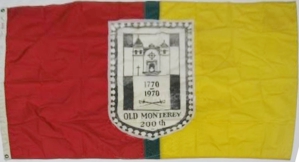 Vertically divided red and yellow by a black stripe, with a black and white shield centered.