The webpage at www.ci.burbank.ca.us/council/index.htm shows the municipal logo appears on most pages, but in too small a format to identify any details.
Ron Lahav, 17 July 2004

A bigger image of the seal can be seen at www.losangelesalmanac.com/images/sealBurbank.gif. It has CITY OF BURBANK on a scroll at the top, some kind of building (perhaps city hall?) an airplane viewed from head on, possibly a light for film set?, the sun behind a mountain and incorporated 1911 at the bottom.
Ned Smith, 17 July 2004

The city flag looks like this image (image only in available in B&W), courtesy of The Flag Shop, Vancouver (date unknown).
Dean McGee, 16 November 2005

An old Burbank flag can be seen at www.wesclark.com/burbank/burbank_flag.jpg. Is the new one the same, but with the current city logo?
Ned Smith, 18 November 2005 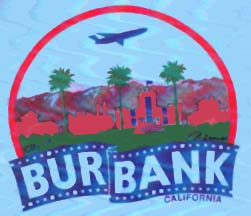 I kind of doubt it's a flag. It's labeled as a portfolio of art by the page owner. I imagine, absent evidence supporting its status as a flag, that this is just somebody's idea of a logo for Burbank.
Joe McMillan, 16 November 2005

The flag shown at home.earthlink.net/~andey/portfolio.html (no longer active) was subsequently reported as a proposal: "...I had entered a contest to design a new flag for the City of Burbank and was the winning designer. However, the project never got off the ground and the design was incorporated into T-shirts and such. Burbank city council decided to keep the old flag design, and I guess there was a lot of red tape..."
Valentin Poposki, 21 November 2005