7:10 image(s) by permission of David B. Martucci
image(s) from American City Flags, Raven 9-10 (2002-2003), courtesy of the North American Vexillological Association, which retains copyright.

Santa Ana’s flag is divided diagonally from upper hoist to lower fly. The hoist triangle is medium blue; the fly triangle is yellow. On the center of the field is the city seal, approximately 4 units in diameter on a field of 7 by 10 units. The seal is surrounded by a dark blue ring which is fimbriated in gold where it overlaps the blue hoist triangle. On that ring CITY OF SANTA ANA arches clockwise over the top half and CALFORNIA is centered on the lower half, counterclockwise, all in gold. At 8:30 and 3:30 o’clock is a small five-pointed star. The center of the seal has a white field. In the upper fly portion, between about 1:00 and 2:30 o’clock, half of a gold sun is visible with 8 gold equally-spaced rays emanating in straight lines to the inner edge of the blue ring. In a similar position on the hoist side is a line drawing in blue of the Orange County government building, in partial profile toward the hoist. Below it, and close to the hoist side, is ORANGE COUNTY SEAT OF GOVERNMENT, in blue centered in three lines, two words over two words over one. In the center lower half of the seal is a blue line image of city hall, in partial profile toward the fly, with trees and shrubs. Centered below this building, in the same lettering, is THE GOLDEN CITY, directly above FOUNDED 1869. The seal was adopted officially in 1972.
John M. Purcell, American City Flags, Raven 9-10, 2002-2003

Blue and yellow (or gold) are the official colors of the city. The sun no doubt alludes to the abundant sunshine of the city. Santa Ana is the county seat of Orange County, hence the county building on the seal. The city’s nickname is “The Golden City”.
John M. Purcell, American City Flags, Raven 9-10, 2002-2003

Little is known about the flag’s history. The ordinance of adoption is a scant four lines, and mentions nothing about how the flag was developed. City hall personnel have no other information available about the flag.
Flag adopted: 2 July 1984 (official).
John M. Purcell, American City Flags, Raven 9-10, 2002-2003

In 1976, the city council sponsored a contest among city residents for a design of the first official flag, with a deadline of May 31 of that year. Mayor John Garthe and Frank Blaszcak, the public information officer, were to choose the three top designs for council to select the winner. Evidently no design pleased the council sufficiently, for no flag was adopted as a result of the contest.
John M. Purcell, American City Flags, Raven 9-10, 2002-2003

Another official city emblem is a black square with "City of Santa Ana" in white serif capitals vertically squeezed and set in two lines, "Ana" isolated in the second line, "city of" in much smaller letters. This logo is used in official city administration forms on line, see:  and possibly in other media, but apparently not on flags.www.ci.santa-ana.ca.us/pba/planning/documents/Minor_Exception_Application.pdf
António Martins-Tuválkin, 11 June 2008

According to this photo, flag is with an ascending diagonal instead of descending diagonal: www.flickr.com/photos/spike_in_irvine/4282762189.
Aleksandar Nemet, 18 January 2010 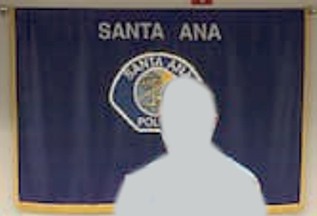 The flag of the Santa Ana Police Department has “police” in all caps on the bottom of the flag. Image obtained from https://www.facebook.com/santaanapd/photos/3733140313430060
Paul Bassinson, 26 March 2021