City and county governments in Hawaii are combined; aside from the city and county of Honolulu, the only other county in the state with a flag appears to be Maui, which incorporates four of the nine major Hawaiian islands.

The flag of the County of Maui has a light blue field bearing a circular, central insignia bounded by an inverted maile wreath with green leaves and white highlights. The diameter of the wreath is roughly half the length of the flag. Below the wreath is a white ribbon with swallow-tailed ends and COUNTY OF MAUI in light blue block letters; under it is HAWAII in much smaller white letters. Standing within the wreath and constituting its central element is an ahina-ahina or silversword plant in light pink, reaching from the ribbon to the apex of the wreath. Stalks of five ti leaves, in a slightly lighter green and with white highlights, flank either side of the lower part of the silversword. Immediately within the wreath, arching clockwise from 9 o'clock to 3 o'clock, LANA'I • MOLOKA'I MAUI • KAHO'OLAWE in dark blue block letters, two words on either side of the tip of the silversword. Silhouette images of the four islands appear behind the entire insignia, in proper relative scale and geographic positions, clockwise: Lanai (in orange), Molokai (in yellow-green), Maui (in bright pink), and Kahoolawe (in light pink).
Ted Kaye, American City Flags, Raven 9-10, 2002-2003

According to the county, the maile wreath, "probably the oldest known of leis", serves as the "tie that binds" the four islands together. The "rare and beautiful ahina-ahina, found on the desolate slopes of Mt. Haleakala" on the island of Maui, symbolizes "the strength, spirit, and courage of the people of the County. The ahina-ahina, faced against the sheer forces of worldwide extinction, and rising above the challenge for survival, clings for existence as one of the world's most exotic plants." The ti leaves, "the sacred symbol of the ancient gods, bestow blessings throughout the aina, the land of our domain." Each island has a "designated color".
Ted Kaye, American City Flags, Raven 9-10, 2002-2003

In 1960 the new Ala Moana Shopping Center opened with 102 flagpoles. Ala Moana officials wanted to fly "meaningful" flags from the poles, and thought that the city flag should be among them. When they learned the city had no flag, shopping center staff asked a local commercial artist to design one, after which they presented it to city council for approval.
Ted Kaye, American City Flags, Raven 9-10, 2002-2003

More about the flag

Concerns about copyrighting the design dominated the council's early deliberations about the flag. The kapu sticks removed from the original design had been intended to indicate "protection or place of refuge to flee from danger", and the red cloak of Hawaiian royalty had signified "the charge of protectorate and guardianship entrusted to the county of Maui by the people". However, the expert from Maui Community College considered those symbols misused and perhaps offensive, and the Ali'i Nui of the Royal Order of Kamehameha I concurred, suggesting the addition of images of the islands "in relief" instead. The county council, acting as a committee of the whole, adopted the final flag design unanimously.
Ted Kaye, American City Flags, Raven 9-10, 2002-2003

At ordlink.com/ the parts of the county code concerning its flag:

Chapter 1.10 COUNTY FLAG
1.10.010 Description.
It is hereby established that the county of Maui shall have an official flag which shall be described as follows:
A. The flag shall be a blue rectangle with a circular, central insignia consisting of a maile wreath within which is inscribed in black, the names of the islands: Lanai, Molokai, Maui and Kahoolawe. The area within the circular maile wreath shall have a centrally located ahina-ahina or silversword, dominating and in the foreground. Immediately flanking both sides of the lower third of the silversword shall be stalks of ti leaves. The left upper portion of the silversword shall be flanked by outlines of the islands of Molokai and Lanai and the right upper portion flanked by the islands of Maui and Kahoolawe. Each island shall be in its designated island color. A banner containing the words "County of Maui" shall be centered at the lower part of the central insignia and the word "Hawaii" located immediately below the banner. (Ord. 1965 § 1, 1990)

The NAVA image at http://www.nava.org/ and shown in the American Flag Survey and American City Flags does not fully match the official description, especially concerning the color of the background, which is shown as lavender - not plain blue, and the overall flag ratio. The legal description mentions island colors, which, trusting the image shown in these sources, are:
* Red: Maui
* Yellow: Lanae
* Green: Molokai
* Pink: Kahoolawe
António Martins-Tuválkin, 23 March 2008

Variant of the flag 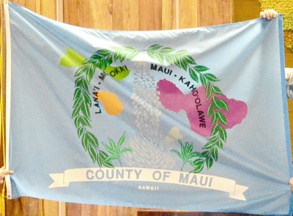 In this variant, the silversword is a very pale color.

The "maile" is a native Hawaiian vine, used, as the "lei of royalty", meaning respect and honors, in the Hawaiian traditional culture. More details on the meaning and uses of the "maile": www.aloha-hawaii.com/hawaii/maile.
Ivan Sache, 23 March 2008 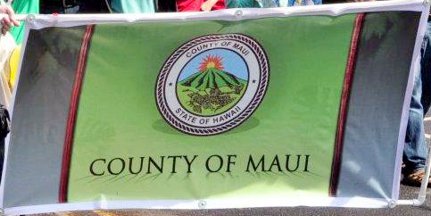 Described simply as "parade banner of the County of Maui", this banner is vertically divided light blue-light green-light blue, by red stripes, with a seal in the center.