"Burlington city council accepts and designates the Burlington Sister Cities Organization flag, as the official City Flag for the City of Burlington, Iowa. Adopted on 15th of May 2006. The blue, gray, black, and white colored flag was deigned by Mark Novak of Image of More Photography. Director of Convention and Visitors Bureau, Novak based his concept on the logo of CVB predecessor organization, which was designed by Tim Larson of Grafik Dimensions Designs. The flag highlights some of the Burlington's attributes, including the Great River Bridge, Snake Alley and downtown steeples. The Mississippi River is represented in the flag by a reflection."
[This is compilation of several texts that I received by the City Clerk.]
Valentin Poposki, 6 March 2009

The colors (and to a certain extent finer details) are guesswork, based on grayscale values, though the positioning seems logical: blue water, gray sky, black and white logo.
Eugene Ipavec, 9 March 2009 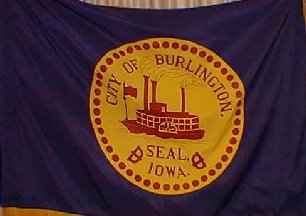 A dark blue field, with a circular yellow seal, consisting of a ring of red dots and a central illustration of a building and a flag on a pole in red.  Above is written CITY OF BURLINGTON and below in two lines SEAL IOWA between two symbols that resemble a B and a B reversed.
Dov Gutterman, 14 November 2002