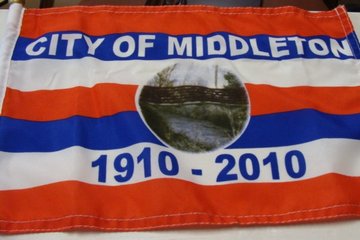 The flag is seven horizontal stripes red-blue-white-red-blue-white-red, CITY OF MIDDLETON written in white on the upper blue stripe, 1910-2010 written in blue on the lower white stripe; a circular disk with a photographic reproduction of a bridge on the middle three stripes.

Middleton is a city in Canyon County, Idaho, United States. The population was 2,978 at the 2000 census. It is part of the Boise City-Nampa, Idaho Metropolitan Statistical Area." - from Wikipedia: en.wikipedia.org/wiki/Middleton,_Idaho.

The city adopted a city flag in advance of its centennial. A document dated February 4th says - "The Mayor showed the audience the new Middleton flag that 3rd grader designed. It will also be used for the centennial, which is next year. " - from: www.middleton.id.gov/AM%20City%20Council/PDF%20Minutes/value3646.pdf.

Photo of the flag was several days presented in Middleton Chamber of Commerce website, but is no longer there: www.middletonchamber.org/?p=5, or is hidden.