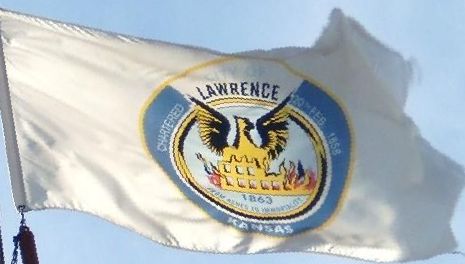 Lawrence is the sixth largest city in the U.S. State of Kansas and the county seat of Douglas County. Located in northeastern Kansas, Lawrence is the anchor city of the Lawrence, Kansas Metropolitan Area which encompasses all of Douglas County. Located forty-one miles west of Kansas City, Missouri, it is situated along the banks of the Kansas and Wakarusa Rivers. In 2007, the city had an estimated population of 89,852. Lawrence is a college town and is the home to the University of Kansas and Haskell Indian Nations University.
en.wikipedia.org/wiki/Lawrence,_Kansas

The flag can be seen on a photo at www.waymarking.com/waymarks/WM2XTK.
Valentin Poposki, 23 October 2008

It is white, with the city seal bearing a phoenix rising from a burning building. 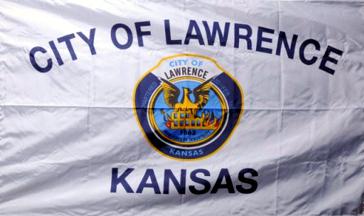 Here is the different version of the flag of the City of Lawrence, Kansas.
Valentin Poposki, 24 October 2010