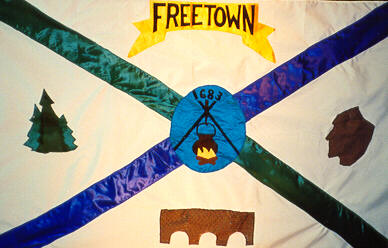 Freetown is in Bristol County, southeastern Massachusetts. The flag is saltire design, with a blue band from lower hoist to upper fly, and a green band from upper hoist to lower fly. In the upper quarter is the town name on a yellow ribbon. In the hoist quarter are some pine trees, in the lower quarter is a bridge-like structure, and in the fly quarter is a human head.
Dov Gutterman, 28 October 2002

FREETOWN -- Town pride is on the minds of the town fathers. As a way to spur pride, selectmen want to update the town's original flag with a flag designed by the Girl Scouts now hanging in the Statehouse. The flag discussion was held at a recent selectmen's meeting when Roland Gendron of the Veterans of Foreign Wars post asked about the flag flying at Town Hall. Mr. Gendron said that during a recent visit to the Statehouse in Boston, he noticed that the Freetown flag hanging there is very different from the one in Town Hall.

Selectmen told him the flag at the Statehouse was designed by the Girl Scouts several years ago and is not the town's official flag. The official flag hangs in the Town Hall and has the town's emblem of a kettle on a tripod over a campfire. Selectmen Chairman Robert Robidoux said the Town Hall flag is rare. It is one of the few original town flags in existence and has become "yellowed and faded over the years." Mr. Robidoux said the town is looking to come up with a new flag that combines the original flag and the one designed by the Girl Scouts. The board did not have a timetable for the design of the new flag or a design itself. However selectmen did mention an idea which includes putting a hilly background behind the kettle and tripod. "We would like to do a combination of the two flags that takes into account the creativity of the Girl Scouts and the original flag from Town Hall. Once we have something designed, we will pass it around and get a feel for how much people like it," said Mr. Robidoux. Mr. Gendron thought it would be in the town's best interest to make the flag available to the public once there is a design in place. "I think that the people of Freetown would like to fly the town's flag in front of their houses. It could be a nice way to generate revenue for the town," Mr. Gendron said.

In "The Standard-Times", 20 March 2008, Kim Ledoux gives an update on the status of the flag of Freetown.

"Officials want to leave the town flag alone, but they support a contest to design a 325th town anniversary commemorative flag to replace the tattered one that represents Freetown at the Statehouse. "The flag that is in the Hall of Flags up on Beacon Hill is one that was produced by the Girl Scouts a number of years ago, and it is in a state of disrepair, so the 325th Committee was interested in launching a contest effort to produce a new flag," said Selectman Jean C. Fox, a member of the 325th Committee. Ms. Fox added that there was a miscommunication in which a number of people, the Historical Commission in particular, received information that the town flag, which is displayed in the town administrator's office, would be replaced.
[...]
Ms. Fox clarified that the contest would not replace the town flag but, instead, would create a flag to replace the felt-on-felt flag currently representing Freetown at the Statehouse.
[..]
Historical Commission Chairwoman Mary E.R. Brown spoke in support of the contest Tuesday. "It would be wonderful to have a flag to commemorate the 325th anniversary, but we shouldn't change the original flag," she said.
[...]"
http://www.southcoasttoday.com/apps/pbcs.dll/article?AID=/20080320/NEWS/803200339
Ivan Sache, 23 March 2008