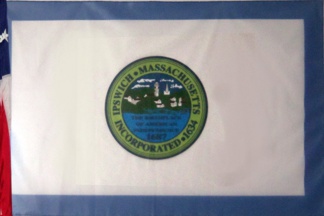 A white flag with the town seal showing a coastal village, and written on the sea THE BIRTHPLACE OF AMERICAN INDEPENDENCE 1687. In an outer ring are the town name and date of incorporation. Ipswich is in Essex County.
Dov Gutterman, 10 November 2002

Behind the Selectmen in Meeting Room A at Town Hall are the American and Massachusetts flags, and in a frame between them is the Ipswich Town Flag. I found the history of our flag in the 1996 Ipswich Annual Town Report:

“This year, the Town Clerk’s office was involved in designing a flag for the Town of Ipswich which was requested by former Selectman Charles Wayne. Ipswich, despite its long and rich history, had never had a Town flag. The flag was designed with the assistance of engineer/ computer whiz Andy Agapow of Burleigh Avenue. The flag has a “cleaned-up,” full-color version of the Town seal on a white background with a royal blue border and fringe. The seal has been changed slightly so it is more readable from a distance.

One of the flags was raised in the Great Hall of the State House on June 13th. Attending the presentation were members of the WWII 50th Anniversary Committee. The flag collection in the Great Hall gallery depicts the unique characteristics and history of the state’s cities and towns. Representatives from the three Polish organizations in Town presented the flag they had donated, with a plaque, to the Board of Selectmen on July 8th. This flag is located in the Town Hall. The third flag was displayed at the Special Town Meeting on October 21st. Many thanks to Andy Agapow, Albert Ebinger and everyone who donated money for a job well done.”