The shield in the quarter of the Anne Arundel County Seal is the quartered Calvert-Crossland Arms. In the Calvert Arms, the six "pales" or perpendicular stripes are alternately gold and black ("or" and "sable"), transversed diagonally, from dexter chief to sinister base, by a bend ("bande"). This bend is counterchanged, where it crosses a gold pale, it is black; where it crosses a black pale, it is gold. The Crossland Arms are "argent" and "gules". Argent, meaning silver, is frequently represented as white, although, strictly speaking, white as a color does not exist in English heraldry. Gules means red. Thus, the Crossland quarters would be red and silver or red and white. The circlet at the top of the Seal might be silver or gold. Since it is much simpler than the crown on the Great Seal of Maryland, the red, indicating plush there, should be eliminated. The two brackets beneath the shield could be silver or gold. The rose contained in each should be red; the thorns, silver or gold.
Rick Wyatt, 3 March 1998

Mystery of the Floretty Crosses

One mystery remains. Why are the crosses floretty instead of botonee, as in the Maryland state flag?

Bob Barnes wrote in the Newsletter of the Maryland State Archives on May 27, 1997:

"... when the seal is currently displayed (1997), an example of heraldic differencing has taken place ... the cross in the Crossland arms has become a cross floretty (its four arms ending in fleurs-de-lis). Just as younger sons sometimes made a slight difference in their paternal arms, so the Anne Arundel County seal depicts a slightly differenced version of the Calvert arms..."

Previous Version of the Flag

"Artists of all ages are invited to design a flag depicting south county's past from an historical and geographical perspective including Shady Side, surrounding communities on the West River and the Chesapeake Bay to be flown at the Captain Salem Avery House Museum in Shady Side.

The flag will be displayed on the new flagpole at the museum, which will be dedicated in June in memory of the late Barbara Owings, founder and past president of the Shady Side Rural Heritage Society. Artwork [...] should be presented on 8½ x 11" paper and can use up to three colors. [...] Entrants should describe their creative process in 100 words or less. Entries will be judged by the society's Flag Committee and announced on March 15. All will be displayed at the museum at the time of the dedication of the new flagpole, a gift of the Barbara Owings Memorial Fund, in June."

South County [Maryland] is not an official county. It is an informal designation for southern Anne Arundel County.
Ned Smith, 30 December 2005

Rodney Calver reports in "The Capital" (1), 15 May 2006, that Ms. Nancy Lee Young, a retired illustrator from the federal government, won the South County flag contest:

"[...]
The contest, organized by the Shady Side Rural Heritage Society, attracted 21 entries. Ms. Young's depiction, showing a blue crab, an oyster boat, a heron and a tobacco barn was unanimously selected as the best. The flag will be dedicated in honor of the late Barbara Owings at the Captain Salem Avery House Museum in Shady Side on June 16. The late Mrs. Owings was a founding member and past president of the society.
[...]
The artist, who confesses to know nothing about computers, did what she knows best. She took out her manicure scissors and some marine, blue paper and cut out her four designs, one for each quadrant of the flag. Ms. Young, a sprightly 76-year-old, said: "When I concentrate, my hands shake a little and I cut the legs off the crab. But I was able to find some paper the same color as the marine blue, so I was able to put more legs on."
[...]
At the museum, Old Glory will still hold pride of place atop the flagpole. But the new design will hang on the yardarm, alongside the Maryland flag.
[...]
Second place went to Sue Dipple of Lothian. Clara Gouin of Deale, was third and Don Avery of Deale received an honorable mention. All will be on display at the June 16 dedication. Also present will be actor Allen Gephardt, of Baltimore, in the role of Francis Scott Key.[...]" 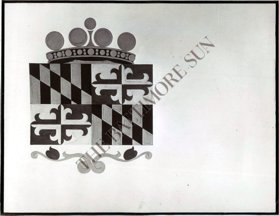 On reverse of the photograph is the date May 23 1968, and a newspaper clipping stating:

Anne Arundel's Flag?
Historically correct, just like the county council ordered, this proposed official county flag has been struck down for the time being by Joseph W. Alton, Jr., county executive. He feels there has been "too much buffoonery" over his request that a county flag fly from the courthouse on flag day, June 14. The design is a pure white field with a badge bearing the black and gold Calvert coat of arms and the red and silver Crossland coat of arms, the official Anne Arundel county seat.