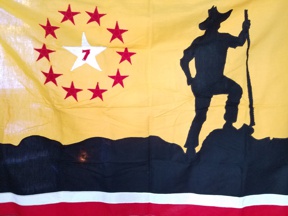 Boonsboro’s flag was first unfurled in 1975. After Mayor Edward. T. Weaver and town council endorsed the idea of creating a flag for Boonsboro, they turned to Pat Lemkuhl, a faculty member at Boonsboro High School. She organized a flag design contest and Wayne Shifler submitted the winning design. The flag’s prominent silhouette of a frontiersman with a hoe was to represent the Town’s founders, William and George Boone, settlers who cultivated the soil. Thirteen stars represent the original 13 colonies and the number seven denotes that Maryland was the seventh state to enter the Union. The colors of Maryland’s state flag, red, black and orange also beautify Boonsboro’s flag.

Helen Lakin Trueheart (Pat Lemkuhl’s aunt) labored to create the flag by hand appliqué in time for it’s official unfurling at the first Boonsborough Days on September 6, 1975. While the flag is not commonly flown around Boonsboro, the frontiersman has become a popular symbol of the town and is seen on banners and literature reminding us of Boonsboro’s historic past.