Portland’s flag has a navy blue field bearing the center portion of the city seal in yellow, approximately half of the hoist width of the flag in diameter. This image (the city’s seal excluding its outer ring with inscriptions) shows a shield overlaid on an anchor, three points of which show; one on each side of the shield and one below it. The stock of the anchor appears above the shield and on it perches a phoenix, wings outstretched, facing the fly, clutching an inverted open wreath. The device on the shield is a ship, resembling a Roman galley with oars and sails, sailing on an ocean toward the hoist. The supporters are dolphins curved downwards around the shield and facing each other. The dolphins, shield, phoenix, anchor, and ship are white with blue details, while the sea is blue with white outlines. Above the seal arches CITY OF PORTLAND, MAINE, and curved below it is RESURGAM, all in gold.
James Croft, American City Flags, Raven 9-10, 2002-2003

Portland, a large coastal city, uses many maritime symbols on its flag including the anchor, the dolphins, and the ship upon the sea. The Roman galley may reflect the classical allusions popular in the mid-19th century when the seal was adopted.

What might appear to be a seagull is in fact a phoenix, holding a wreath, a mark of esteem. The phoenix, the mythical bird fabled to consume itself by fire and then rise from its own ashes, is an emblem of immortality and resurrection. Along with the motto, RESURGAM (“I arise”), the phoenix alludes to the rebuilding of Portland after it was twice destroyed by fire, first by the Indians in 1690 and later by the British in 1775. In 1866, the seal became an even more appropriate symbol of the city’s destruction and rebuilding when one-third of Portland was consumed in a fire which left 10,000 people homeless.
James Croft, American City Flags, Raven 9-10, 2002-2003

The phoenix as a symbol for Portland can be traced to its use on an early militia color. Recorded in The Cumberland Gazette of 25 October 1790: … Amongst others, that of a Standard gave great satisfaction. The ground of it is a bright buff, and the device [alluding to Portland’s quick recovery from the two earlier disasters] is happily designed. It represents a Phoenix rising from its ashes.
James Croft, American City Flags, Raven 9-10, 2002-2003 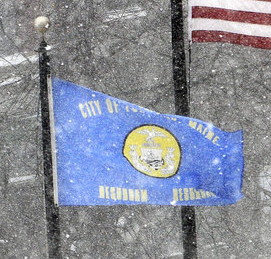 A variant of the City of Portland Maine Flag has surfaced. On 2 Feb 2011 the Portland Press Herald ran a story about the great blizzard. As a part of the story there was a picture of three flags flying in the storm with someone cross-country skiing below. The flags (U.S., Maine and City of Portland) are flying and the Portland flag is royal blue with the city seal in the center minus the encircling inscriptions (but with what I think is a dark blue ring) and the inscriptions "City of Portland, Maine" arched over the top in all-caps gold and "Resurgam Resurgam" arched below also in all-caps gold. Much like the 1998 image (above), except a lighter blue, a narrow dark blue ring edging the seal, the design on the seal in a lighter blue except the water is dark blue and light blue instead of white and dark blue, and the bottom inscription repeats the City motto.
Dave Martucci, 5 March 2011

This photo is from the Portland Press Herald dated 2 February 2011 and shows a very different flag, with the city’s motto repeated twice. The flag I saw in 1996 was similar except the motto was only inscribed once, the blue was a bit darker and there was no black ring around the city seal.
Dave Martucci, 18 May 2019 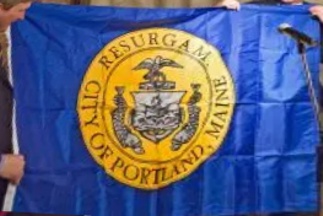 Image obtained from https://portlandflag.files.wordpress.com/2016/01/portland-city-councilor-ed-suslovic-presenting-the-flag-of-the-city-of-portland.jpg?w=300&h=212.
14 May 2019

There is no official Portland, Maine flag. I know of at least three variants, each made “on the fly” at the time they were needed. The photo presented dates from 2007 and was published in the Portland Press Herald, although I don’t have the exact date.

In 1996 or so, I went to the Portland City Hall on a quest to find out about the city’s flag. Eventually, I ended up in the City Clerk’s office. I asked about the flag and was told in no uncertain terms, “Portland does not have a city flag.” I pointed out the window at the City Hall Flag Poles and then asked “So what is that flying from the second pole?” The clerk responded “That is the Portland City Flag!” She explained the City Hall maintenance department gets them made when they need to be replaced and that it was simply an unofficial process to meet an unmet need.
Dave Martucci, 18 May 2019