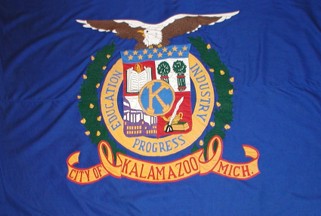 Blue flag with the city arms on it. The webpage at www.hannahmckinney.com/City%20Commission.html notes:

"This flag was the result of a contest in 1931 to design a city flag; John Toornman of the Henderson-Ames Company entered the winning design.  His notes on the design elements include, the American eagle and 13 stars, the colors red, white and blue from the National Emblem. Surrounding the shield a large circle having the letters Education, Industry and Progress.

The City flag was ordained October 12, 1931 by Ordinance 117 which includes the above description and has prohibitions against using the City flag for advertising purposes.

The description of the emblem on the flag is correct, but it is set on a field of blue. The relevant section of the Kalamazoo City Code records:

"The city flag shall be blue, charged with an emblem as follows: The American eagle and thirteen (13) stars and the colors red, white and blue from the national emblem; upper left quarter of shield symbolizing religion; upper right quarter of shield, our principal agricultural product, celery; the lower left quarter of shield, industry; the lower right quarter of shield, education; superimposed on shield the letter "K"; surrounding the shield a large circle having the letters, Education, Industry and Progress; the entire emblem surrounded by a live oak wreath indicating growth, with ribbon scroll, with the letters of the City of Kalamazoo; and all in accordance with the design thereof on file in the office of the city clerk, such design being expressly made a part of this section the same as if attached hereto."

The second paragraph quoted above from the Mayor's web site, is probably erroneous, as the City Code as codified in 1977 was a recodification of existing ordinance of a "general and permanent" nature. Other ordinances, including that cited, 117 of the former Administration Code, were dropped from the Code and are specifically repealed. However, the source of each section, ie the group of former Codes which were recodified, is given, together with a most comprehensive index. The historical Code given for current Section 2-1 (City flag - Described) is not 117, but A101, meaning former Administrative Code 101. 117 does not appear in the historical index.

The current citation for the prohibition on advertising purposes is 2-2 (City flag - Unlawful display or attachments).