The city says after they asked the community to submit designs for a chance to create Duluth’s new flag they received a total of 195 submissions from 98 artists. Blane Tetreault was selected as the contest winner. A resolution to adopt his flag will be part of the City Council agenda on Monday.

The idea to design a new city flag was brought forward during the Imagine Duluth 2035 community engagement process. “Flag design, or vexillology, came up as a Big Idea during the Vision Committee process for Imagine Duluth 2035. As we explored the idea, it was clear that citizens weren’t widely aware that Duluth had a city flag. We also learned that the current flag’s design isn’t always considered an inclusive symbol for all Duluthians,” said Adam Fulton, Interim Director of the City Planning and Economic Development Department. “The Duluth Flag project was created from that original feedback, and provided a forum for a community-driven process.”

According to the Tetreault’s flag design statement, “the colors in the flag represent the clear blue of the sky, refreshing water of Lake Superior, deep green of the north woods, and snowy winters.” The design symbolizes Thompson Hill, Enger Hill and Hawk’s Ridge while the star symbolizes the Zenith City of the North.
Dave Fowler, 14 August 2019

The City Seal in the flag is divided diagonally by a bend vert containing 5 five-pointed silver stars; a steamboat moving to the left/west; below the steamboat, a bale of wheat surrounded by 11 stars; on the right side of the seal, another bale of wheat positioned below lake water; an oak tree at the bottom of the shield; laurel branches to the left and right of the shield; an eagle with wings spread positioned atop the shield and facing to the right/east; along the perimeter of the seal, the words CORPORATE SEAL OF THE CITY OF DULUTH with the year 1887 centered at the bottom.

SYMBOLISM: The green, white, and blue represent Duluth's woods, snow, and streams which were home to the area's original Native Americans. The colors were also selected because they were widely used by Spirit Mountain, the Duluth Transit Authority (DTA), as well as the municipal government. The cross formed by the blue and white stripes represents many of the European flags, particularly those of Scandinavia, recognizing the foundation and settlement of the area by those cultures. The fleur-de-lis represent those displayed on the royal French flag which explorer Greysolon Sieur DuLhut, for whom the city is named- carried with him during his expedition to the Lake Superior area.

The city seal represents Duluth's status as an incorporated municipality and is replete with symbolism. Within the seal itself, the steamboat represents Duluth's role as a major shipping hub on Lake Superior; the shock of wheat symbolizes the area's agriculture; the 11 stars surrounding the wheat garb represent the 11 townsites platted (Fond du Lac, Oneota, Rice's Point, Fremont, North Duluth, Portland, Endion, Belville, Cowells, Duluth, and Middleton/Park Point) and later consolidated to form the incorporated municipality; the oak tree represents the lumber industry; the eagle atop symbolizes protection, wisdom, and magnanimity; the laurel branches denote achievement or victory.

HOW SELECTED: Not known. The final design was recommend for Council approval and adoption by resolution of council's October 1, 1979 legislative meeting.

DESIGNER: Not known; however, a committee was formed by Village Trustees Seip, McClennan, and Mendenhall to prepare a design for a village seal. Village Recorder Davis paid $11.80 for the seal design. The actual designer of the seal is not known. SOURCE: research performed by James Scott, primary consultant, and David M. Schmidt, a member of the International Society for Heraldry and Family Trees. The research was initiated/requested in 1970 by Mayor Ben Boo.

MORE ABOUT THE FLAG: Although a flag was not adopted until 1979, a seal was in use when Duluth existed as a Village as early as 1877, and subsequently upon its incorporation as a City in 1887. During the 1890s, some city departments used variations of the seal such, as the Police Department in 1894. In the "official" seal, The orientation of eagle's head changed from the 1877 seal (facing left) to the 1887 replacement (facing right).

FORMER FLAG(S): None known. Resolution 79-791R implies that no official or unofficial City flag existed prior to 1979, although a municipal seal was first used as early as 1877 and modified upon incorporation as a city in 1887.

Detail of the seal 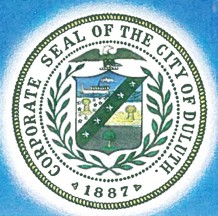