The ordinance of adoption describes the Minneapolis flag:

A royal blue pennant on a white field or background with a white circle on the blue pennant divided into four parts; each of the four parts of the circle containing a blue symbol …

The circle is divided horizontally and vertically by a narrow cross that nearly reaches its outer edges. The circle, centered on the blue pennant at the hoist side of the flag, occupies 30% of the field, according to the official specifications. In the upper hoist quadrant of the circle is a stylized building with seven columns; in the upper fly quadrant, a draftsman’s square superimposed on a cog wheel so that the square forms a right angle parallel to the angle of the cross in that quadrant; in the lower hoist quadrant, a pilot wheel with six spokes; and in the lower fly quadrant, a microscope placed so that the user would face the hoist.
John M. Purcell, American City Flags, Raven 9-10, 2002-2003

The colors were selected to harmonize with the national and state flags when flown together. The symbols on the circle have the following meanings: the building, education and the arts; the cog wheel and square, labor and industry; the pilot wheel, the city’s lakes and rivers and all activities identified with them; and the microscope, research, skilled craftsmanship, and progress. The symbols combined represent the beauty, harmony, and brilliant future of the city.
John M. Purcell, American City Flags, Raven 9-10, 2002-2003

A “Committee for the establishment and procurement of an official flag for the City of Minneapolis” was established by the city council on 12 November 1954, comprising Mayor Eric C. Hoyer (ex officio), two aldermen, the city clerk, and three “qualified citizens of the City of Minneapolis to be designated by the aforementioned Committee members”. This committee established a citywide contest to design a flag and appointed five jurors to select the winner. The top prize was a $250 U.S. Savings Bond, with four $100 Savings Bonds awarded to the runners-up in the categories of Elementary Schools, Junior High Schools, Senior High Schools, and Adult Group.
Flag adopted: 27 May 1955 (official).
John M. Purcell, American City Flags, Raven 9-10, 2002-2003

Upon adoption of the flag, a color guard comprising members of the Minneapolis Police Department Band presented the United States flag and the new city flag to the city council, placing them on either side of the rostrum.
John M. Purcell, American City Flags, Raven 9-10, 2002-2003

Confusion about the colors 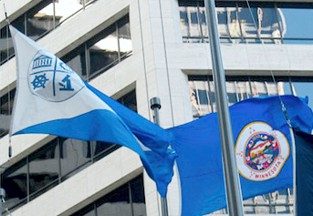 Based on a photograph that I recently found online, as well as the accompanying text, it appears that our understanding of the city flag was incorrect and the colors need to be reversed. The article and photographs, regarding the flags that can be seen in downtown Minneapolis, can be found at www.minnpost.com/stroll/2012/03/downtowns-flags-us-course-minnesotas-%E2%80%94-and-certain-white-pennant-blue-field.

The Minneapolis city flag here is in the form of a white pennant on a blue field. The circle on the pennant is the same.
Randy Young, 27 June 2015

The page quoted at www.ci.minneapolis.mn.us/about/images/citygraphics.html still existed with the same information in 2007. Even this 2014 MinnPost article, with the photographs, also has a drawing of the downtown map with the flags on it, and there it shows a flag with a light field and a dark triangle. Yet, the writer describes the flag as being a white pennant on a blue field as if this is the normal state of things.

So, what does it now say on the city's website? Simple: www.ci.minneapolis.mn.us/clerk/clerk_cityflag (last updated 15 June, 2015)

Adopting an official Flag of the City of Minneapolis and directing that the original design be kept on file in the office of the City Clerk for use in reproduction of other flags.

Whereas, the City Council has heretofore appointed a committee to select a flag of the City of Minneapolis; and

Whereas, the said committee has, after diligent effort, selected a suitable design for such a flag; the design of said flag being as follows:

A royal blue pennant on a white field or background with a white circle on a blue pennant divided by four parts; each of the four parts of the circle containing a blue symbol, i.e., a building symbolizing education and the arts; a cogged wheel and square symbolizing labor and industry; a pilot wheel symbolizing our lakes and rivers and all activities identified with them; a microscope symbolizing research, skilled craftsmanship and progress - all of these symbols combined point out the beauty, harmony and brilliant future of our City.

Now, Therefore, Be it Resolved: That the above described design be and is hereby adopted as the Official Flag of the City of Minneapolis and that the original design therefore be filed and kept of record in the Office of the City Clerk as a model to be used and copied by all persons desiring and authorized to reproduce the flag.

But what then is in the photograph? I don't know. The only photographs of a Minneapolis flag that I've found so far are indeed those in the article, thus there's no body of occurrences to compare to. The author, Andy Sturdevant, does appear to have some interest in flags, and you'd think he'd notice that this one copy was the wrong way round, if it were, unless on the ground the flag is as rare as it is on the Internet.
Peter Hans van den Muijzenberg, 27 June 2015

I have lived in Minneapolis and visited often. I have only seen the "blue" pennant on a white field. I suspect the white pennant on a blue field is an error, unless the city quietly changed their flag.
Lee Herold, 27 June 2015

Thank you for looping me in on this conversation. I am pleased to report that your original depiction of the Minneapolis flag is correct: blue pennant, white background, as per the city council's resolution in the 1950s. The flag depicted in the photo is incorrect, as was my original description of the flag's color arrangement.

Part of the point of the original piece was that the Minneapolis flag is completely unbeloved -- I don't find it to be a particularly great design, and most of my fellow citizens seem to agree with me. If they didn't, you'd see it out in the world more often. It's exceptionally rare to see the city's flag in person around town, and as we find in this case, even when it *is* displayed, it's the wrong color scheme. (And as Peter pointed out to me, not only did I get the description wrong, but no one noticed for three years.)

There is in fact an urban legend around these parts that for years, the flag was hung upside down in City Hall, and no one noticed for decades. You'll notice if you do a Google image search for the flag, you find virtually no examples of the flag being flown out in the world -- I think the only example is from my article. And it's the wrong color configuration! The plaza where it flies is owned and (presumably) maintained by a private corporation, not city property, so I wonder if they made a mistake in ordering or commissioning it. I don't have any more information on that.

As a side note, since the original article and its follow-up about St. Paul was posted, there has been a groundswell of support in St. Paul for that city's flag. A few enthusiasts began printing and selling it, and in fact, the St. Paul flag now flies proudly in the city's new minor league ballpark. In just the space of a few years, the St. Paul city flag has become a much more common sight than its Minneapolis counterpart.
Andy Sturdevant, 29 June 2015