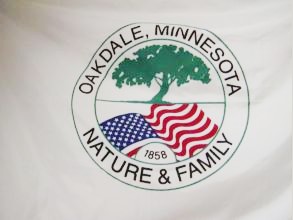 The flag of the City of Oakdale, Minnesota, is white with city seal on it. In the circular design, there is a tree over US flag and date 1858. In the circle is written "OAKDALE, MINNESOTA" and "NATURE & FAMILY".

About the city:
"Oakdale is a city in Washington County, Minnesota, United States, on the eastern side of the Twin Cities metro area. The population was 26,653 at the 2000 census. Oakdale is the 31st largest city in Minnesota, in terms of population. The city of Oakdale today is the result of a consolidation of Oakdale and Northdale Townships in the 1970s, and continued to annex land well into the 1990s." - from Wikipedia: en.wikipedia.org/wiki/Oakdale,_Minnesota.