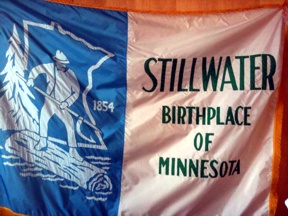 The flag of the City of Stillwater, Minnesota, is vertically divided blue and white. On the blue half is scenic design consists of a man standing on a flowing tree and a tree in a back and a map of Minnesota and year 1854. On the white half in green "STILLWATER / BIRTHPLACE / OF / MINNESOTA". The flag was made in 1997. Information and photo of the flag thanks to Nancy Manos, Admin Secretary.

About the city:
"Stillwater is a city in Washington County, Minnesota, directly across the St. Croix River from the state of Wisconsin. The population was 15,143 at the 2000 census. It is the county seat of Washington County" - from Wikipedia: en.wikipedia.org/wiki/Stillwater,_Minnesota.

Stillwater is it called the "birthplace of Minnesota" because (from the community guide at Stillwater's website):
" on May 29, 1848 when Wisconsin became the 38th state of the union, its western boundary was the St. Croix River and everything west of that was left out - unorganized - a no man's land without government control. Accordingly, on August 26, 1848, a convention was called at Stillwater where 61 delegates from the unorganized territory assembled laying out a new territory and naming the area "Minnesota," a Dakota word suggested by Joseph Renshaw Brown which means "Sky Tinted Waters." Resolutions were drafted and Henry Hastings Sibley was elected to deliver the resolutions to Washington. On March 3, 1849, Congress formed the new territory of Minnesota."
www.ci.stillwater.mn.us/vertical/Sites/%7B5BFEF821-C140-4887-AEB5-99440411EEFD%7D/uploads/%7B22804BDC-CD3B-4A66-AA53-D94D2DE5C881%7D.PDF, page 4