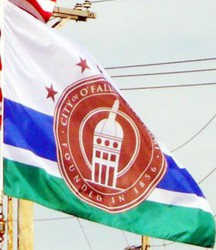 The City of O'Fallon, Missouri, has a flag, but the City Clerk wasn't able to find any image of that. The only information from the City Clerk Pamela L. Clement is that the flag designer is the artist Mark Carroll.
Valentin Poposki, 23 March 2009

The flag is horizontally striped white-blue-white-green, in an approximate ratio of 8-4-1-3, overlain by the seal in brown and white, with brown stars arched over the seal. 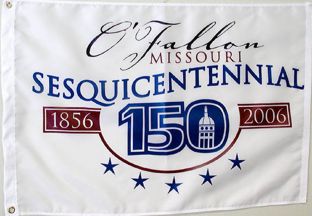 The City of O'Fallon in Missouri, USA, adopted a sesquicentennial flag which is in use from 01.01.2006 until 31.12.2006. It is shown here: www.celebrateofallonmo.com/Souvenirs.html.