The purple/yellow/green triband with crown - which may appear either vertical or per bend sinister, & with the crown in either purple (usual) or green (rarely) - is indeed the MARDI GRAS celebration flag!!!! Mardi Gras (Shrove Tuesday) is celebrated - usually in New Orleans - before Lent.
Robert Lloyd Wheelock, 10 July 1999

Let me just add that, apart from New Orleans, this celebration is worldwide famous also in such places such as Venice or Rio de Janeiro, usually under the name "Carnaval", "Carnevale" also (which originated the different meaning english word "carnival"). "Mardi Gras" is the third and last of this three day celebration (called in portuguese "Fat Sunday", "Fat Monday" and "Fat Tuesday" -- the same as "Mardi Gras"), before sorrow Ash Wednesday (Lent?), the first of days of fast that precede Easter.

I draw attention to the Carnaval (Mardi Gras, not carnival) in Rio, where can be seen in all it's splendor the samba school's flags, usually gyronny of many. Other cities in Brazil (and even abroad) also follow this tradition. 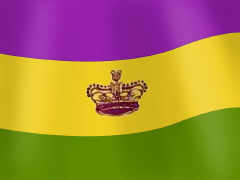 There is no "official" Mardi Gras flag, AFAIK. In New Orleans you can find all sorts of flags in the P-Y-V combination: vertical horizontal, probably diagonal, with or without the crown, and the colors not always in the same order. But wave them they do!
Al Kirsch, 1 March 2001