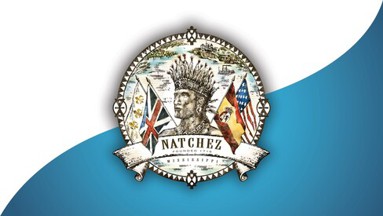 A de facto flag for the city of Natchez is shown at https://www.djournal.com/news/around-mississippi/ex-gop-governor-hopeful-becomes-democratic-mayor-of-natchez/image_cd458ecb-e832-5f9f-87b4-ba29e3e9ff52.html. It is divided by a curved boundary white over blue with the seal centered.
Dave Fowler, 27 July 2020

This flag is adopted officially as a "second flag":
https://www.natchezdemocrat.com/2020/07/29/natchez-adopts-city-seal-unity-flag-as-a-second-flag/:

Officials formally adopted a second flag to represent the City of Natchez seal while keeping the original Natchez flag during a Tuesday meeting. Natchez Mayor Dan Gibson presented the new flag bearing the City of Natchez seal as a gift to outgoing mayor Darryl Grennell during the inauguration ceremony the the newly elected mayor, board of aldermen and municipal judge last week. At the time, Gibson had said he hoped the flag would become the new city flag with approval from the Natchez Board of Aldermen. Gibson said he since received feedback from both supporters of the City Seal Flag and the original city flag.

The seal, Gibson said, honors all of the contributors to Natchez’s history with the placement of the Natchez Indian flanked by the French, British, Spanish and American flags. The seal is also circled by West African Adinkra symbols “Mmere Dane,” which means “change,” and “Boa me na me mmoa wo,” interpreted to mean “help me and let me help you.” On the flag, the seal is positioned in the center of a wavy blue and white background. Gibson said the blue of the flag represents the Mississippi River that allowed the City of Natchez to exist and the white represents purity and light.

Gibson also recommended during Tuesday’s meeting that the board amend the city seal so that it would include the words “in God we trust.”

A diagonally divided red over blue flag, separated by a white wavy line. In the upper hoist a gold sun with the word "Natchez" written on it. Around the perimeter, a gold rim.

The City flag has a length that is one and one-half times its width. The field is divided diagonally, red over blue, and is separated by a white convex wave. It is surrounded by a yellow border. In the canton of the red field, a yellow sun-disc proudly displays "Natchez" in stylistic, cursive script.

The colors of the flag recall the French, Spanish, English, United States and Confederate States occupation. The convex wave represents the river that has played such a major part in her history and prosperity. The sun-disc symbolizes the Native Americans that inhabited the area and gave their name to the city. The colors are representative of the golden wealth of the city, the red blood of her people who made Natchez such a vibrant place, and the blue representing the spirit of unity in her people, making a brighter future through civic pride.