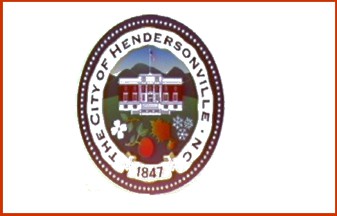 "Hendersonville is a city in Henderson County, North Carolina, USA, 22 miles (35 km) southeast of Asheville. As of the 2000 census, the city population was 10,420, up fivefold in one century. It is the county seat of Henderson County." - from Wikipedia: en.wikipedia.org/wiki/Hendersonville,_North_Carolina

The flag: 07.07.2011: "Thursday night, Hendersonville City Council approved a design for an official city flag. It's basically just the official city seal on a gold background. In June 2010, council discussed the possibility of adopting an official city flag in connection with the Sister Cities program. More than a year later, council members revisited the issue and unanimously approved the new design." - from: www.hvillescoop.com/The-Daily-Scoop/Annual-2011/Hendersonville-Now-Has-a-Flag (no longer available), including a photo of the flag.