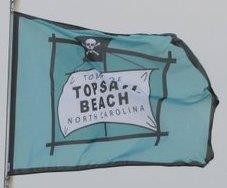 The Town of Topsail Beach, incorporated in 1963, is located in Pender County, North Carolina. Quoting the municipal website:

"Situated at the southern end of Topsail Island, off the coast of southeastern North Carolina, the Town of Topsail Beach is the smallest of the three communities located on the 26-mile long island. North Topsail Beach occupies the northernmost section, and Surf City, the largest town on the island, is in the center. Topsail Island has a rich and varied history. Local folklore claims the name, Topsail (pronounced Tops'l), originated during the 1700's when pirate ships roamed the coastal waters. Historians explain that marauding pirates hid their ships in the channel behind the island and waited for passing merchant ships loaded with goods. The pirates would pursue and attack the merchants, claiming the cargoes as their own. Eventually the merchants became aware of this infamous hiding place and began to watch for the tops of the pirates' sails showing over the rolling dunes - hence the name Topsail Island. Prior to World War II, the only access to Topsail Island was by boat. Area residents frequently made this short trip and picnicked on the sandy shores of the Atlantic Ocean. Local farmers are said to have driven their livestock across the waterways to graze on wild grass. During the war, the U.S. Navy took over the island and began a joint venture with Johns Hopkins University known as Operation Bumblebee. The waterway was dredged, roads were built, and fresh water was piped onto the island. Operation Bumblebee was the beginning of the space program for the United States Government. An arsenal center for the assembly and storage of rockets was built on the sound side of the island, and launching pads were constructed on the oceanfront. Concrete observation towers were built throughout the island to monitor the experimental launchings. Over 200 rocket launchings took place on the island between 1946 and 1948. When the testing program was dismantled, the government sold the island to the public. Many of the original military structures are still standing.

Incorporated in 1963, the Town of Topsail Beach boasts a friendly, family oriented style of beach living. High rise development is not allowed, beautification is encouraged, and conservation of the island environment is a top priority. There are over 1200 homes, but only about 500 year-round residents. The seasonal influx of tourists increases the population to about 7,000, which helps sustain the town's motels, restaurants, gift shops, fishing pier and other businesses. The only sea turtle hospital in the state, the Karen Beasley Sea Turtle Rescue and Rehabilitation Center, is located on the sound near Town Hall. The arsenal (Assembly) building from Operation Bumblebee now houses the Missiles and More Museum as well as a meeting room that is available for rental."

Reporting the design of a flag for the town of Navassa in "The Wilmington Star", 26 December 2006, staff writer Angela Mack incidentally wrote: "In Pender County, Topsail Beach recently began flying its official flag." 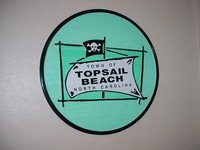 The municipal website shows the official seal of Topsail Beach, which might (or might not!) be used on a flag. The picture seems to show the seal as applied on the white wall of the Town Council meeting room rather than the real flag.
Ivan Sache, 3 January 2007