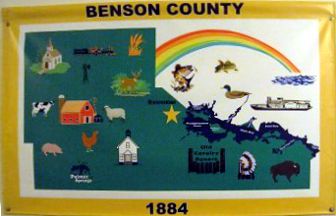 The Benson County flag was created for the 125th anniversary of the county which was celebrated on August 18th, 2009. The flag was made to represent life in the county at the time it was settled. The designers were Randy Thompson and Ellen Huffman, part of the Benson County staff. The county logo is the outline of the county with the towns and cities shown. Photo of the flag and information thanks to Ellen Huffman, Tax Assessor.

The county:
Benson County is a county located in the U.S. state of North Dakota. As of the 2000 census, the population was 6,964. Its county seat is Minnewaukan. It was named for B.W. Benson, a member of the Dakota Territory legislature. Sullys Hill National Game Preserve and much of the Spirit Lake Indian Reservation are located within the county." - from Wikipedia: en.wikipedia.org/wiki/Benson_County,_North_Dakota