Blue-yellow-blue triband with the seal in the center.

The 1984 article "Civic Flags of New Jersey" by Don Healy shows an Ocean City, NJ flag without the seal. The blue - buff - blue pattern on the flag is said to represent the city's geographic location between the Atlantic Ocean and the Great Egg Harbor Bay. Since this article was published in 1983 and FOTW shows a flag with the seal I would assume this is a variant. However on Google Street View the flag is shown flying in front of city hall.
Michael Del Duca, 27 August 2019 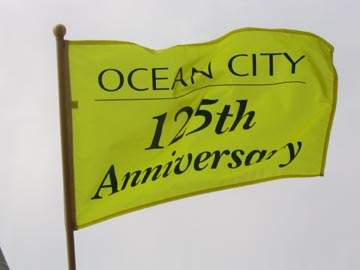 The 125-anniversary flag of the City of Ocean City in New Jersey, US was found at www.bridgeandtunnelclub.com/bigmap/outoftown/newjersey/shore/oceancity/
Valentin Poposki, 12 October 2005