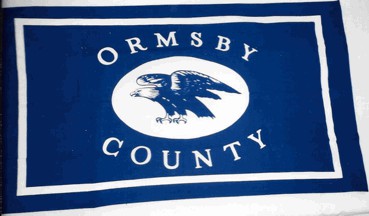 Note on the Ormsby County flag:
Ormsby County, Nevada, ceased to exist in 1969 when it was merged into the Carson City municipal government.
Lane Startin, 6 May 2003

The design dates from 1964, and alludes to Eagle Valley, the original name for the valley in which the former county seat, Carson City is located.
Jim Ferrigan, 19 January 2015