Cleveland has a vertical tribar of red, white, and blue stripes, with a shield with the city's coat of arms centered on the white stripe. According to the ordinance of adoption: The middle stripe shall bear the American shield with the word Cleveland in blue, across its center, and the figures 1796 in red, at its base encircled by a [green] laurel wreath. The outline of the lower half of the shield shall be in red and the upper in blue. In the upper left-hand corner [as seen by the viewer] shall stand an anvil, hammer and wheel, and in the upper right-hand corner an anchor, windlass and oars. Under the shield, in black letters, shall be placed the words Progress and Prosperity.
John M. Purcell, American City Flags, Raven 9-10, 2002-2003

The colors are those of the United States flag. (Cleveland's flag predates the Ohio state flag, adopted in 1902, which uses the same colors.) The devices on the shield represent Cleveland's status as an industrial city and a commercial port on Lake Erie. Moses Cleaveland founded the city in 1796. It was named for him, although the spelling has been altered.
John M. Purcell, American City Flags, Raven 9-10, 2002-2003

The Cleveland Plain Dealer sponsored a contest to commemorate the city's centennial in 1896. After a great deal of deliberation, a committee of the city council selected the winning entry from among a large number of designs because of its "dignity, simplicity, and appropriateness". Adopted: 24 February 1896 (official)
John M. Purcell, American City Flags, Raven 9-10, 2002-2003

Miss Hepburn later married the Plain Dealer's reporter, Robert Beach, who had delivered the winning prize of 50 silver dollars to her. Initially some citizens opposed to the idea of a city flag, believing it would compete with the revered national flag, so to dispel any controversy the city council referred to the flag as the "city banner" in the ordinance of adoption.

Manufactured versions of the flag evidently rarely follow the ordinance's specifications for the motto under the shield. The letters are often shown in blue (likely to save expense), and the word "and" between "Progress and Prosperity" is sometimes shown as an ampersand or even a large dot. Some versions of the flag also make the white center bar wider, to accommodate the shield more comfortably. Cleveland police officers wear the flag as an arm patch and it appears on the logo of police cars.
John M. Purcell, American City Flags, Raven 9-10, 2002-2003

Commonly we see incorrectly made flags with the only two colors (cheaper to make), showing the wreath in red and the lower motto in blue.
John Purcell, 1 August 2002 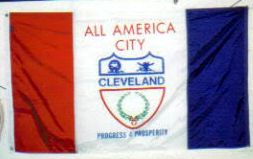 Three proposals thought to be by I.T. Frary, and found in the Cleveland Plain Dealer, 8 September 1895, page 21 have been posted on Flickr: www.flickr.com/photos/cbustapeck/5486738171/in/photostream/. The first image has a design consisting of two shields bearing the name "Cleveland." On one shield is a carpenter's square and machinist's calipers, typifying industries, and on the other the pilot house of a ship, typifying shipping interests. Between the shields is the torch of liberty with an incandescent light substituted for the flame. The second design shows a UK union jack-like arrangement with 8 white stripes, each with a star between them, and in the centre a seal showing an open book, which may represent the Bible, law or literature. On it rest a pen and a hammer, while above hang the scales of justice. On the seal is written VOX POPULI; VOX DEI; CLEVELAND. The third design is a framed white flag bearing in the center the torch of liberty, the wreath bearing the word LIBERTY, the date 1796 and the name CLEVELAND.
Valentin Poposki, 15 June 2011