A blue flag, with a greenish blue and white swirling figure, the name in a scripted text, incorporation date, and a circle of 14 gold stars in the lower fly.

BATAVIA - Clermont County would like to have an official county flag, and officials are asking those who live in the county for help. The county is sponsoring a contest to design a county flag, with entries being accepted through April 15. Kathy Lehr, director of communications for the county, said they were contacted by state Senate President Richard Finan, R-Evendale, last year asking for a county flag to be flown in Columbus in honor of the state bicentennial celebration in 2003. "We do not currently have a Clermont County flag," said Ms. Lehr. "So the commissioners thought this would be a good opportunity for our citizens to take part in the design of this." The county would like to unveil the official flag at the Clermont County Fair in late July.

June Creager, executive director of the Clermont County Convention and Visitors Bureau and one of the judges in the design contest, said she will be looking for artistic merit and probably some historical elements in the design. "I personally would also look for ways the design could be used in different mediums," said Ms. Creager, who pointed out as an example its use on a lapel pin. She said the county could use an official flag. Her office gets two or three calls a year from groups, such as Boy Scouts and Girl Scouts, asking whether there is such a flag.

Rick Crawford, a historian with the Clermont County Historical Society and also a contest judge, said he would look for something historical to be represented on the flag. What comes immediately to mind, he said, is a picture of Ulysses S. Grant. The 18th president and Civil War general was born in Point Pleasant. "It means a kind of singular identity (to have an official flag)," said Mr. Crawford. "It would distinguish us from other counties and also promote a pride in the area."

The Clermont County flag was designed in 2002 by Melanie Gilliam, a local graphic artist. Her design depicts Clermont County as the gateway to freedom, prosperity, and equality. The stylized "C" in the flag design represents the county proximity to the Ohio River, as well as the sweeping progress of growth and the promise of her bright future. The circle of fourteen golden stars symbolizes each of the townships and the unified way their governments work together. Clermont County was established in 1800, and takes its name from the French word meaning "clear mountain." 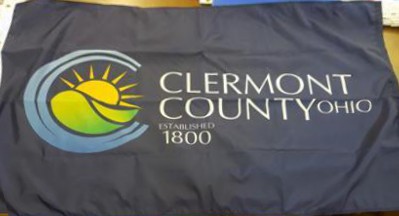 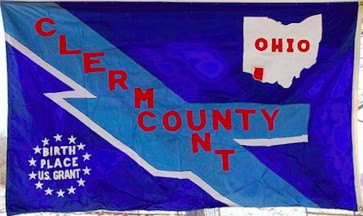