The flag of Columbus has three vertical stripes, in approximate proportions of 1:2:1. In the manufactured version the center stripe is actually closer to 2.3, no doubt to accommodate the large central device. The ordinance of adoption specifies the colors of the stripes as chrome yellow at the left [hoist]; scarlet red at the right [fly]; and white at the center. The seal and coat of arms of the city appear on the center of the white stripe. The 1912 resolution adopting the original flag and seal describes the device:

On a blue field a half-wreath of buckeye leaves, green, and a half-circle of 16 stars, the whole enclosing a national shield bearing a gilt circle in which appears a galley, or vessel, of the fleet of Christopher Columbus, after whom said city is named, said shield and vessel to be in proper colors, above and clutching the shield to be an eagle, with outspread wings, proper, guarding a golden yellow star, making the seventeenth and representing Ohio. Above and between the wings of the eagle to appear the cupola of the state capitol, surmounted by the lettering Columbus, Ohio, gilt, in old English letters.

Due to confusion over the years about the seal and the coat of arms in the device described, on 9 December 1958 the entire emblem was designated as Columbus' official seal. Because the wording describing the seal allows some latitude for an artistic interpretation, several different versions have been used.
John M. Purcell, American City Flags, Raven 9-10, 2002-2003

Christopher Columbus's ship recalls the city's name. The shield and eagle are traditional American symbols. The capitol building shows that Columbus is Ohio's capital city. The 17 golden yellow stars commemorate Ohio as the 17th state to join the Union (in 1803). The yellow and red colors of the flag suggest the colors of Spain, Columbus's patron on his voyage to the New World.
John M. Purcell, American City Flags, Raven 9-10, 2002-2003

Few city flags have had such a convoluted history as the Columbus flag. It is not known whether the flag legislated in 1929 ever flew. By at least as early as 1965, however, the city flag on display in council chambers was very different from the one adopted, having three vertical stripes of red, white, and blue, with the seal in the center stripe.

In 1975 when the discrepancy was finally noticed, the wrong flag had been displayed for at least ten years. The proportions of the stripes on this flag were ostensibly 1:1:1, but the center stripe was closer to 1.3.

In 1976, for the United States bicentennial, the correct flag was made and installed in city hall. The stripes on this flag were approximately 1:1.4:1. These stripe proportions were in use until about 1985, when the current proportions came into use. The flag's official proportions of 10:19 are the same as the United States flag.
John M. Purcell, American City Flags, Raven 9-10, 2002-2003

In 1976 the seal was given blue background, and the flag was defined as stipulated in the 1929 law (deep yellow - white - red tricolour). Buckeye leaves half-garland as shown on many websites has leaves separated.
Rob Raeside, 21 August 2014

Flag is known to be a tricolour, red-white-blue, with a squarish shield, but the order of stripes were reversed (7 red, 6 white).

In 1912 a white flag, with a squarish shield, and garland (laurels?) below, stars and name making a circle was introduced. The shield had 7 white and 6 red stripes.
Ben Cahoon, 6 August 2014

The first flag of Columbus, adopted 12 February 1912, was the seal/coat of arms on a blue field. A committee convened by city council had chosen it. Although the 1912 council clearly stated that the flag, not the seal, had a blue field, a modern literal interpretation of the language gave the seal a blue field in the 1976 version of the flag.
John M. Purcell, American City Flags, Raven 9-10, 2002-2003 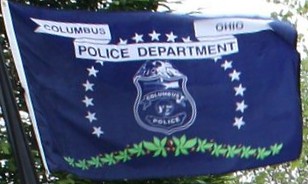 Here is the photo of the flag of the City of Columbus Police Department: farm4.static.flickr.com/3235/2303380358_87d7291062.jpg. It is blue with white ribbon with words "COLUMBUS / POLICE DEPARTMENT / OHIO" and CPD badge surrounded by stars and leaves below.
Official website: www.columbuspolice.org.
Valentin Poposki,, 17 April 2010 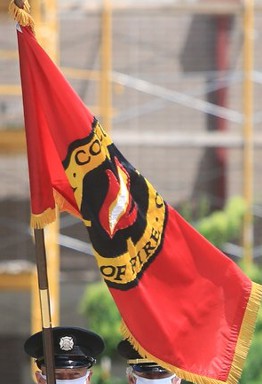 Battelle is a nonprofit organization that manages or co-manages seven Department of Energy national laboratories.

Flag is 3 horizontal stripes of light blue/white/light blue in 1:2:1 proportions, with the previous Battelle logo in dark blue in the center.