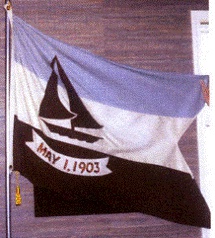 I found in my files a PDF that I saved from the work of John M. Purcell on Ohio municipal flags from his paper "Civic Flags of Ohio's Smaller Cities" from the XIV Congres Internacional de Vexil-logia Barcelona 1991.

"The City of Bay Village flag is unusual for its color combination rarely seen in vexillology. The horizontal tricolor of light blue, white and chocolate brown has a silhouette of a sailboat in brown superimposed near the hoist on the top two stripes, the letters on the ribbon beneath are also in brown. The flag was designed in 1970 by Jean Tont."

"Bay Village City Council approved the design of the official bicentennial flag at the council meeting on Monday, April 26 [2010]. The design incorporates the traditional sailboat and Old English letter B used on the Bay Village city flag along with two birds in the right hand corner and the dates of 1810-2010. City councilman David Tadych designed the flag and stated that the birds each represent 100 years of Bay Village history. The council resolution approved the the flag design to be displayed throughout the city during the year-long bicentennial celebration."

The City:
"Bay Village is a city in Cuyahoga County, Ohio, United States. The population was 16,087 at the 2000 census. Bay Village began its separate existence as the village of North Dover in 1901 when it split from Dover Township. A few years later it was renamed to Bay, thus being the village of Bay. It became a city in 1950 with the name Bay Village." - from Wikipedia: en.wikipedia.org/wiki/Bay_Village,_Ohio