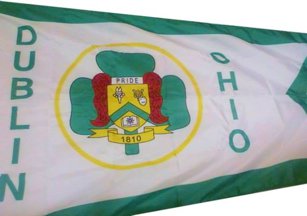 A swallow-tailed flag, white, with a seal on a shamrock-leaf centered and the city and state names written vertically on either side in green.
Vanja Poposki, 12 July 2013

Vuk Dražić located an image of the seal of the City of Dublin (Ohio, USA) at upload.wikimedia.org/wikipedia/en/6/6e/Dublin_Seal.png. Completely different!

Adopted by the Village of Dublin on March 21st, 1977, unanimously accepted by the six council members who were present. The flag was created in response to a contest held by the Ladies Police Auxiliary, wives of Dublin Police Officers. Winners of the contest were the McNemar girls: Coleen, Cindy and Caroline.

Symbol meanings:
Green and white border represents the colors of Dublin.
Gold ring symbolizes the rich corn fields which make up the original landscape of Dublin.
Shamrock gives homage to Dublin, Ireland and its namesake.
Red leaves are to represent the people - the life and blood of Dublin.
Torch represents athleticism.
Faces and harp are representations of the arts.
Book to represent academia.
1810 is the year Dublin was established as a village.
dublinohiousa.gov/living/dublin-ohio-flag - City's website

Accordingly, the emblem in the middle of the flag appears to have been created by the designers of the flag, and is not necessarily the official city's seal.