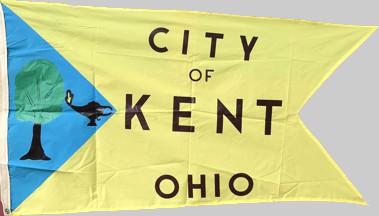 The city of Kent, Ohio, has informed me that it does not have a flag.
Valentin Poposki, 20 December 2010

The City of Kent, Ohio, recently informed me that the City doesn't have a flag. However, a discussion in the City Council from 06.01.2010 adds some light on that issue:

There was no further questions nor audience comment at this time.
MOTION TO APPROVE THE FLAG POLICY AS PRESENTED.
Motion made by Mr. Wilson, seconded by Mr. Kuhar, and carried by a voice vote of 7-0-1, with Mr. Valenta abstaining."
- from www.kentohio.org/gov2/2010/Jan6-CD.pdf
Valentin Poposki, 8 January 2011

103.05 OFFICIAL FLAG DESIGN ADOPTED.
The design of the City flag from and after the date of this resolution (Resolution 1975-155, passed October 15, 1975) shall be as follows: the background shall be blue symbolizing the Cuyahoga River, trimmed in gold, the City color; within the borders of the flag shall be a tree symbolizing the tree city motto and a lamp of knowledge symbolizing the presence and contributions of our school system and Kent State University.
(Res. 1975-155. Passed 10-15-75)

City to fly new flag
By ALLEN BARTLETT
Nine-year-old Keith Bauer had his name recorded in the city books Wednesday night. Bauer, 1624 Chadwick Drive, is a fourth grader at Holden Elementary. He won a contest sponsored by the Kent Jaycee Janes, wives of Kent Jaycees, for designing an official city flag. Kent City Council unanimously adopted his design at their meeting. BAUER'S CREATION is the same size and shape as Ohio's state flag. Colors are blue and gold, symbolizing the Cuyahoga River and city color, respectively. The design includes a tree for Kent, "The Tree City,' and a lamp of knowledge for the city's school system and KSU. Mayor Joseph Sorboro indicated at an Oct. 1 meeting he would check into the cost of flags and the number needed.
Cody Topp, 18 May 2020