The city has informed me that it has no flag.
Valentin Poposki, 31 May 2009

The emblem on the flag seems to be the city seal shown at www.cityofparma-oh.gov/images/city-seal.jpg.

The former flag may have been dropped - this may well have been in conjunction with the change in city logo announced on this webpage www.cityofparma-oh.gov/logo.aspx where the former logo, the same as seen on the old flag, is replaced by the logo now used as the city seal and seen on the more recent flag.
Ned Smith, 23 February 2013

AN ORDINANCE TO ENACT SECTION 103.03 "OFFICIAL MUNICIPAL LOGO" OF THE CODIFIED ORDINANCES OF THE CITY OF PARMA, AND DECLARING AN EMERGENCY
Motion made by Councilman Brennan seconded by Councilman Day to amend Ordinance No. 47-10 by accepting Exhibit "A". Further moved to refer Ordinance No. 47-10 back to the Governmental Operations Committee.
Motion carried."
- 01 March 2010, Minutes: www.cityofparma-oh.gov/_fileHandlers/meetingminutes.ashx?minuteFileID=1178.
Peter Hans van den Muijzenberg, 23 February 2013

The Parma ordinances are searchable here: www.amlegal.com/parma_oh. Unfortunately no mention of the city flag.
"103.03 OFFICIAL MUNICIPAL LOGO.
Council hereby adopts as the official logo of the City the following: [graphic of logo]
The entire Council heartily recommends the fullest practicable employment of the logo on stationery, documents and other publications and correspondence prepared by City officials.
(Ord. 47-10. Passed 3-15-10.)"
Ned Smith, 23 February 2013

Image obtained from a sale posting on e-Bay.

Detail of the Seal 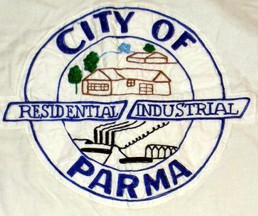