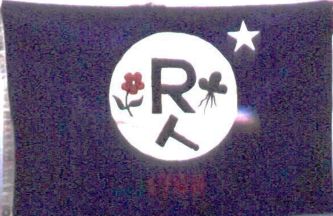 Ravenna is a city in Portage County, Ohio, United States. It was formed from portions of Ravenna Township in the Connecticut Western Reserve. The population was 11,771 at the 2000 census. It is the county seat of Portage County. It is named for the city of Ravenna, Italy. - from Wikipedia: en.wikipedia.org/wiki/Ravenna,_Ohio.

More about city history at municipal website: www.ci.ravenna.oh.us/history.html. I found a photo of the city flag as it was during Ravenna's bicentennial celebration in 1999: www.reed.lib.oh.us/parade/parade-2.html.

The flag shown above is rather dark. The white disk on a dark blue field shows a large blue "R" in the center. On the hoist side of the disk is a red flower with five petals and green leaves; on the fly side is a green shamrock with roots. Centered below is a brown gavel. Outside the disk on the upper fly side is a white five-pointed star. Centered below the disk are the red numerals "1799."

The flag was designed by school children (not named), and adopted on August 21, 1972. The symbolism is not explained in the ordinance of adoption, although the gavel probably indicates that Ravenna is the county seat of Portage County. The white star is located on the field in much the same position as the city is in Ohio. The numerals, 1799, mark the arrival of the first settler in what later became Ravenna.