Green field, the - rather sketchy - city coat of arms in the lower centre accompanied by the city slogan or motto in white Gothic letters: "City / of" (above) and "Pride" (below). Arching over all is a large white scroll proclaiming in black Gothic letters "Whitehall"; at left, coming after a fold, black year "1948" (Gothic) and at right, also coming after a fold, black name "Ohio" (Gothic). The white coat of arms is lined red on the outside, fimbriated white, and divided reversed per pall, black lines separating the three segments. The (visual) left upper part bears a black house with two trees nearby, the (visual) right upper part bears a black church and the lower part an ancient lamp, burning; in the centre is a disk bearing a waving U.S. national flag placed diagonally.

In December 2007 'The Freedom From Religion Foundation' objected to a nativity display near city hall - the green flag is dimly seen waving over this "particular ugly creche" (top, right photo): www.ffrf.org/fttoday/2007/dec/nativity.php.

Official site showing the seal, which features the arms: www.ci.whitehall.oh.us/. There, we learn that in the 19th century Robert Brotherton of White Hall, England owned land on which was built the Olde Whitehall Tavern, popular with stagecoaches. Later a village grew around this spot unofficially called Whitehall; 1947 saw the village's incorporation. It was soon settled by war veterans: "In the early 1950s, Whitehall was the nation's fastest growing city. (...) Today, population has leveled at approximately 20,500."

More on Whitehall ("a suburban community of Columbus, Ohio"): en.wikipedia.org/wiki/Whitehall,_Ohio. 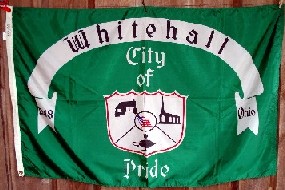 The variant is a more vibrant green color.