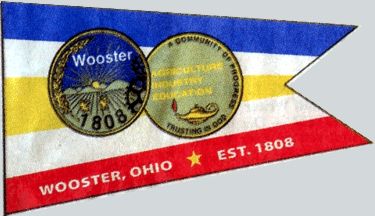 Although a Bicentennial flag was recommended to the City of Wooster by its Bicentennial Committee in January, 2008, to commemorate the city's founding in 1808, the flag was not officially adopted by the city council until March 17, 2008. The flag is a burgee, in imitation of the shape of Ohio's state flag. The field is divided into 5 horizontal stripes, from the top, blue, white, yellow, white, and red. They are mostly equal in width except the center yellow stripe is a bit wider at the hoist than the others and a bit narrower at the fly. On the red stripe the words WOOSTER, OHIO EST. 1808 appear in white capitals. A five-pointed star, in yellow separates "OHIO" from "EST."  Superimposed across the flag's field in the center, between the blue and red stripes are large circular depictions of the two sides of the city seal. The obverse of the seal has a narrow yellow fimbriation around the circumference. The scene on the seal recalls the State of Ohio seal, showing a rising yellow sun with rays extending into a dark blue sky, which form the upper half of the seal. About a fourth of the way down on the seal from the top is "Wooster" in Arial-font white letters. The lower half of the seal is a dark green, with two yellow corn shocks centered on the field. Below the shocks is "1808" in black. Curved around the hoist side of the seal is a yellow wheat stalk; on the fly side are a portion of two gears in black, the upper one slightly smaller than the lower one. The obverse of the seal (and it is rare for seals to have two sides), is also fimbriated in yellow. The field is entirely dark green. Centered at the bottom of the field is an ancient Grecian lamp in yellow with a red flame burning.  Above the lamp in white capital letters are AGRICULTURE (top) INDUSTRY (center)  EDUCATION (bottom), aligned to a straight left margin, one above the other. Curved in smaller black capitals from the top center around the fly edge is the motto A COMMUNITY OF PROGRESS. Centered and curved at the bottom under the lamp are the words, also in black capitals, TRUST IN GOD.

There has been a movement to make this flag the official city flag after the Bicentennial is over. However, resident Heidi Boord has objected, claiming that a design she presented to the city in 1993 when she was a Girl Scout should be considered to be the city's official flag, although apparently it was never officially adopted. To complicate matters further, the city evidently had an earlier flag, also unofficial. So the issue of whether the Bicentennial flag will become the new city flag is currently undecided.

"Wooster - It's been 200 years coming, but in just a few weeks, the city will finally have an official flag flying over the municipal building and other city-owned structures. Designing a flag for Wooster was a job taken on last year by the city's bicentennial committee. This week the celebration's co-chairmen, Jeff Musselman and Greg Long, unveiled the final drawings of the flag, which is in production. The first batch of the banners are expected to be available to the public in early February. Musselman said the committee, in conjunction with F.J. Designs and Murr's Printing of Wooster, started working on a city flag about a year ago, and wound up with about 10 design proposals to consider. In recent weeks, the committee has winnowed down the choices. Long noted one of the most significant aspects of the flag is it is pennant-shaped, sometimes called a "burgee," which mirrors the profile of the State of Ohio flag. The Ohio flag is the only pennant flag in the Union.

The one-sided flag contains the logo of the City of Wooster on a striped field of red, white, blue and gold. Musselman explains the blue stripe represents justice and perseverance, the red stripe represents hardiness and sacrifice, the white stripe represents liberty, and the gold stripe represents hope and prosperity. In addition, the gold stripe is a color that both Wooster High School and The College of Wooster have in common in their official pallet. "The stripes in the Ohio flag represent roads and rivers - and in our case, transportation and commerce," Musselman said. "This is a tribute to Wooster's early history as a crossroads and its ensuing history of economic development as a result of those roadways."

When the flags are received from the manufacturer, Long said, they will be taken to Wooster City Hall, where each one will be flown briefly over City Hall before being repackaged for sale. Each flag will contain a certificate, signed by Mayor Bob Breneman, stating it was flown over City Hall during Wooster's bicentennial year - something Long said is sure to make it an instant heirloom.

Extract from the Wooster Daily Record, 16 March, 2008:
[image of Wooster flag, as shown at the top of this web page]
Caption: City council is expected to designate this design as the official Wooster flag at its bi-monthly meeting on Monday night. 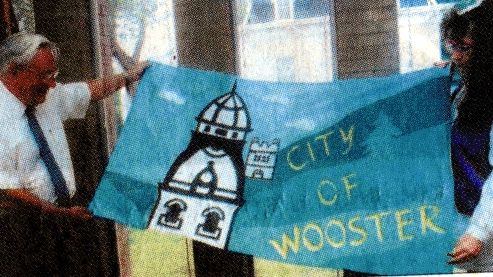 Wooster - Council voted to adopt an official flag to commemorate this year's city bicentennial, but one resident wanted to clarify the adopted flag was just for the bicentennial and not the official city flag. Heidi Boord came before council and presented a flag she designed in 1993 that she said former Mayor Clyde Breneman accepted as the city's official flag. An article appeared on the front page of the June 15, 1993, edition of The Daily Record showing a 15-year old Boord presenting her design to Breneman. Then a cadet senior in her Girl Scout troop, Boord designed the flag as part of her community service requirement for a Silver Award.

The design features a blue background with white clouds over green fields with the likeness of both the county courthouse and The College of Wooster's Kauke Hall in the foreground. Although Boord was unavailable for comment following Monday's council meeting, her mother, Colleen, said her daughter presented the flag on Flag Day in 1993, and it was kept at City Hall for several years afterward. Heidi Boord told Mayor Bob Breneman, Clyde's son, City Council adopted the flag's design in August 1992, but said she did not present the banner until the following June. But Breneman and Law Director Richard Brenson, who held his current post in 1993, said they have not been able to find anything in writing that deemed Boord's design as the city's official flag. "Mr. Brenson drafts all legislation for the city and he's sure there was nothing drawn up on this," Bob Breneman said. "I pulled out our resolution book and Cheryl Collins pulled out the ordinance book and we couldn't find anything. So then we thought maybe it was something Council considered in the miscellaneous portion of their meetings, so we went through all the meeting minutes over that time period, too. We'll keep searching until we find it, though, because she definitely has photo documentation. Extract from the Wooster Daily Record, 30 March, 2008:
City discovers yet another flag to ponder; this one from a 1975 competition - by staff writer Bryan Schaaf

Wooster - How many flags can one city have? In Wooster's case, the number has grown from zero to three in a matter of a few weeks. Following City Council's adoption of an official bicentennial flag at its March 17 meeting, and then a presentation from Wooster resident Heidi Boord showing a flag she designed in the early 1990s, yet another pennant with the city's seal has been located. Wooster resident Rich Monahan pointed out the third flag, which has been residing in the community room at the Wooster Recreation Center on Bever Street.

The blue and white banner with the city's seal and the words "All-America City" emblazoned on a crest was presented to Wooster with its designation as an All- American City in 1975, said city Human Resources Manager Kathy Gallo. "I was involved in that competition on behalf of the city of Wooster," Gallo said. "That flag is a symbol of the winners. We were given this award to fly and use with our seal for a period of 10 years after the competition. It's not a city of Wooster flag, but really a symbol of winning the competition."

Wooster was one of 12 communities given the honor in 1975, being joined by Allentown, Pa., Excelsior Springs, Mo., Fall River, Mass., Gardner, Mass., Grand Prairie, Texas, Norfolk, Neb., Pontiac, Mich., Raleigh, N.C., South El Monte, Calif., Spencer, W.Va., and Spokane, Wash. The city was also a semifinalist for the award in 1998. No record the All-American City flag was ever adopted as an official flag of Wooster has been found.