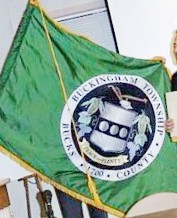 "Thanks to the generosity of the folks at Our Lady of Guadalupe Roman Catholic Church, Buckingham Township supervisors now have a flag with the township seal on it they can call their own. Church officials presented the flag to the board at a recent meeting. The Rev. Msgr. Joseph P. Gentili said the church, now under construction and set to be dedicated April 30, plans to post flags in the church's narthex. They will include flags representing the United States, the Vatican, the Commonwealth of Pennsylvania and Bucks County. When it came to Buckingham Township, church officials requested a flag from the township to display, but none existed. So, they offered to have one made using the township seal. The green background color was chosen by the board of supervisors. In presenting the flag, Gentili said as long as they were having one made for the church, they decided to have one made for the township as well." - from doylestown.patch.com/articles/our-lady-of-guadalupe-donates-flag-to-buckingham#photo-3670492, including a photo of the flag. It is green with township seal on it.