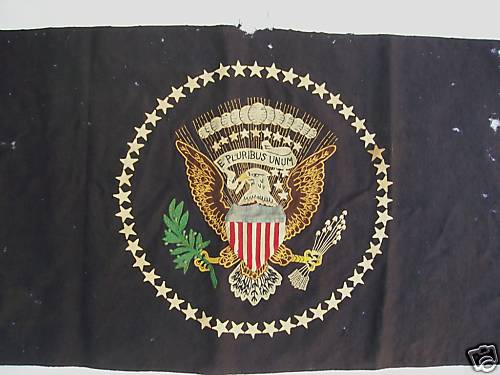 True for the national flag, but not the Presidential flag. From May 1916 to October 1945, the Presidential flag had one large star in each corner, the eagle in the coat of arms was all white, and it faced to its own left. In October 1945 the design was changed to have the eagle in color, facing to its own right, and the four stars in the corners were replaced by a ring of stars equal to the number of states. The 48-star Presidential flag was used from 1945 until July 4, 1959, when it was replaced for one year by a 49-star version. Since July 4, 1960, the flag has had 50 stars.

US Presidential Flag revision of 1945

The new presidential flag ordered by President Truman takes on added significance in Fresno with the discovery one of this city's citizens designed and did the art work on it.
(Photograph captioned: "Brooks Bloomer")
Brooks Bloomer, a former artist for The Fresno Bee engraving department, who recently was discharged from the navy after three years of service, today revealed he had designed the flag which was to have been sent to the late President Franklin D. Roosevelt, shortly before his death in April, and later remade the emblem at the suggestion of President Truman. The Fresnan was stationed at the San Diego Repair Base as a specialist, first class, in the navy visual education department at the time the flag was created.

Commodore Byron McCandless, the head of the San Diego base until his retirement several months ago, well known collector and expert on flags and designer of the first presidential flag, went to Bloomer early this year, with the more or less free lance project of redesigning the old flag of honor of President Roosevelt. The Fresnan said the design for the Roosevelt flag had the grouping of the 48 stars in the four corners of the blue field. When the design was sent for approval after the death of President Roosevelt, the new leader sent it back with the suggestion of circling the seal of the president with the 48 stars. Bloomer said today he did not know President Truman had accepted the new flag design until the picture of it was released this week to newspapers.

He and his wife the former Lorraine Peterson are temporarily residing with her mother, Mrs. Freda Peterson, on Platt Avenue."

Though the article first claims the flag was ordered by Truman, the history described later suggests the then current president merely approved the result of a development already under way. The article also lists Byron McCandless as the designer of the first presidential flag. Presumably this is was the 1916 design, mentioned by Joe McMillan, 29 December 2001.

A design with 12 stars in each corner would have encountered a problem with the incrementing number of the states.

In the scan of the copy of the article provided by Douglas Bloomer, the text starting with "the new leader" and continuing until the end of the paragraph is struck through, suggesting Brooks Bloomer, or possible a later owner, disagreed with this part of the article.
Peter Hans van den Muijzenberg, 3 April 2016 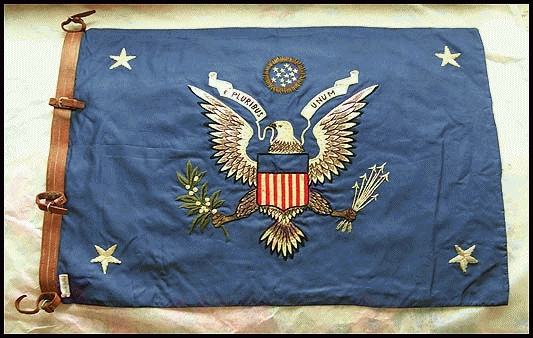 Attached are images I received from the Wilson Library years ago.
Clearly there were at least two car flags, but it is clear that older flags were used after 1916 in official capacities.
Jim Ferrigan, 24 August 2015

Neither of the existing Wilson flags match the specs for the flag developed in 1916, but rather are the "Peace" flag design with four stars added. I have a high resolution copy of the photo from 1919. Attached is a drawing based on the official spec sheet. Contact me off list if you want a scan of the spec sheet. 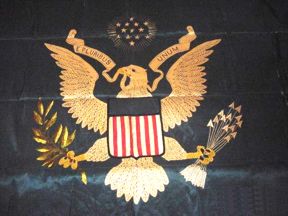 The writer sent me these pictures as well. The markings make clear that this is a US Navy issued flag (NY NY is New York Navy Yard; the heading is also inscribed "No. 6," which is a size marking). She also has a very good provenance for it. I believe it is completely authentic, based on the photos.

The interesting thing about this flag is that it does not match the design shown in the Navy's 1899 edition of Flags of Maritime Nations ([usn99]), which shows the coat of arms in full color. However, it does fit the pre-1945 pattern of other Presidential flags used by the US Navy, namely those of 1882 and 1916, in that the eagle is white, with only small areas of other colors (stripes in the shield, green olive branch, etc). It would seem odd, if full color had been used during the early 20th century, to revert back to a white eagle when a new design was adopted in 1916.

My suspicion is that, although the regulation said that the President's flag was the national coat of arms on a blue field, the actual practice was to show the coat of arms predominantly in white. Not only would this make the emblem more visible at sea (and less expensive to produce) but it would also conform to USN tradition by which the senior officer or official always has flown a blue flag with white markings, whether that be the number of stars equal to the number of states, as in the case of commodores pre-1857, the number of stars indicating rank, as today, or the flags of the Secretary of the Navy and now the Secretary of Defense.

In principle, the US Army in 1901 adopted the same design as the Navy for a hoistable Presidential flag (as opposed to the color carried in parade-type ceremonies), but I would not be surprised if the Army actually did have the flag made up in full color, since the Secretary of the Army's flag adopted in 1903 used the full color coat of arms. A Presidential flag, apparently in full color, was displayed at the groundbreaking for the Panama-Pacific Exposition in San Diego in 1911 (see B&W photo at www.sandiegohistory.org/pancal/expo/650presidflag.jpg), even though President Taft was not there in person. I have no information on whether the flag was supplied by the Navy, Army, White House, or some other entity.

Here is an old photograph of the car flag used when president Woodrow Wilson came in Paris, France, on 14th December 1918. I found it in Gallica, a catalogue of digitalized documents from the French national library: http://gallica.bnf.fr/ark:/12148/btv1b530059133.r=fanion.langFR
It seems similar to the 1902 version shown at us-presh.html, but there are some differences:
- the field seems to be clear, although the photograph being in black and white, we can't be sure about that (it might be the reflection of the light)
- the eagle is looking on its own left
- it holds arrows (only six) in its right talon and an olive branch in its left one.
Corentin Chamboredon, 18 August 2015

Another photo of this flag apparently taken at the same time is in the Library of Congress. There it is dated 18 January 1919. Before Wilson became President there were three different Presidential flags: The President's Flag (blue with the full US Arms in color); The President's Standard (Red with a very large blue 5-pointed star in the center, fimbriated white, bearing the full US Arms in color, with 45 small white 5-pointed stars surrounding the central star, and four larger white 5-pointed stars (but not as large as the central star), one in each corner; and the President's "Peace" flag (blue with the US Arms but the eagle in white). The latter was supposed to be for use in peace time while the Standard was supposed to be used during war time only (hence the 45 stars).

In 1912 the Standard was changed by swapping the field color and the very large star color and increasing the star count to 48. It was no longer only to be used during war time.

Wilson made an official change in 1916 to all this by changing the design of both the flag and the standard to the same design: blue with the President's arms and four stars, one in each corner. The eagle on this flag was white.

However, during his second inaugural, the former Standard was clearly used and in 1919 apparently the former "Peace" flag (or a variant of it; the fly seems to be mounted at the pole) was used at the Peace Conference. It seems likely to me it was made in or provided by the French Government as the car and driver were supplied by them.
Dave Martucci, 22 August 2015

Army version of the Presidential flag (1898)

I found an image of the flag associated with Taft. It is described at student.sba.muohio.edu/ims/oldsites/NewTaftSite/addr/_taftmuse/News/TaftFlag.htm, part of the Taft Museum website.

It has a red field, a white star in each corner, and the US coat of arms on a blue star fimbriated white, surrounded by white stars. According to the webpage, Whitney Smith stated that was the Army version of the Presidential flag from 1907 to 1912.
Ned Smith, 20 July 2004

From the book "Flags to Color, Washington to Lincoln," and is on page 14. It's listed as "Proposed Presidential Flag, 1817."

Quoting the book:
"Colors: first quarter blue with white stars; second quarter white with a brown eagle having white head and tail feathers and gold beak and claws and an olive branch of green; third quarter with a woman dressed in blue holding a green wreath and a brown pole with a red liberty cap; fourth quarter 7 red and 6 white stripes."

"Captain Samuel Reid had ideas for a number of American flags which, however, Congress did not adopt. One was to symbolize the president: it included the national stars and stripes, the coat of arms, and the figure of Columbia frequently used to symbolize the nation before the allegorical Uncle Sam developed."
Randy Young, 8 October 2004