The flag of the City of East Providence, Rhode Island, is white with city seal on it surrounded by three blue stars - on the left, on the right and over it, and a scroll below the seal with motto "PRO BONO PUBLICO". Information by Kim A. Casci, City Clerk, City of East Providence.
Valentin Poposki, 3 April 2009

The East Providence Police Department is the law enforcement body responsible for maintaining law and order in the city of East Providence, Rhode Island. The flag of the East Providence Police Department can be seen in several photographs online, including here and here and here. The flag features the Department's badge in red centered on a grey field. Arched above the badge are the words "EAST PROVIDENCE" in red, capital, serif letters, while the words "POLICE DEPARTMENT" are inscribed below the badge in similar lettering.
Randy Young, 2 August 2016 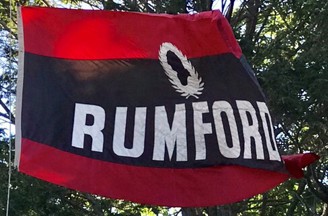 The Village of Rumford is unincorporated village within the City of East Providence, RI. Here is a photo of its flag flying on a pole.
Valentin Poposki, 28 February 2021