This drawing above represents the pre-1963 flag (obverse) as it is usually illustrated. In my collection, I have a pre-1963 South Dakota flag made by Dettra flag company with a variant design.
Clay Moss, 18 February 2009

I recently acquired an Annin made 3x5 foot cotton pre-1963 South Dakota state flag. As was the specification in those days, the flag is two sided. However, the interesting thing about the reverse side of this flag is that the details of the South Dakota state seal are all black on the light blue background.
Clay Moss, 18 August 2011

A photograph of the reverse of the pre-1963 flag was placed for sale on ebay. This flag claims to have a seal, like the current one, but it doesn't seem to have the serrated edge, unless in a shade that in B&W is very close to that of the background. It appears we don't currently show the pre-1963 version, only a variation thereof, so I'm not sure about this. Then again, I'm not sure why a pre-1963 reverse should have a serrated edge at all, as in the variant version.
Peter Hans van den Muijzenberg, 24 November 2013 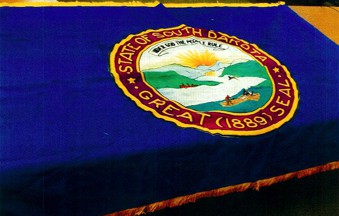 PIERRE | Missing since January, one of two original, handmade South Dakota state flags with ties to an Old West lawman and Deadwood's storied past has been recovered in Washington, D.C., and theft charges are pending against a former employee of the Secretary of State's Office, Attorney General Marty Jackley said Wednesday.

The azure blue and gold flag, dating to 1909, had been displayed for decades in the Secretary of State's Office at the Capitol in Pierre, but was missing in January when incoming Secretary of State Shantel Krebs took office. An internal investigation commenced, and the disappearance was reported to the Department of Legislative Audit, Jackley said. The case was referred to the Attorney General's office in July, and a subsequent probe tracked the prized possession to the nation's capital, Jackley said.
...

"Our recovery of the original state flag preserves and protects an important part of South Dakota history, which dates back to Seth Bullock, Doane Robinson and Ida Anding," he said. Jackley described Anding, who designed the starburst flag, as "South Dakota's Betsy Ross."

Since its recovery on Oct. 8, the flag had been returned to the Secretary of State's Office, Jackley said. The second original flag is preserved at the South Dakota State Historical Society office in Pierre, said Director Jay Vogt.

In 1909, Bullock suggested to state Sen. Ernest May of Deadwood that South Dakota needed a state flag. May then proposed the idea to South Dakota State Historian Doane Robinson, a man later labeled "The Father of Mount Rushmore."

According to a history of the state flag published in the SD Blue Book in 2011, Robinson adopted the idea and mentioned that Ida Anding, former operator of KGFX Radio in Pierre and then-stenographer of the Historical Society offices, would be happy to design a flag.

Anding's design, featuring a blazing sun on an azure background, was ratified by Senate Bill 208, which added the Great Seal of the State of South Dakota on its reverse side, and quickly passed the Legislature. The bill also appropriated funds with which to produce two of the flags. One went to the secretary of state, while the other was presented to Bullock and his Camp No. 1 of the United Spanish Veterans of South Dakota.

Bullock biographer David Wolff, former dean of the Black Hills State  University College of Liberal Arts and a retired history professor, said Wednesday that Bullock's ability to suggest a state flag, have it designed, approved and manufactured all in the same year, signified the respect South Dakotans afforded him.

"Bullock did a lot in his lifetime," Wolff said. Among the many achievements of the man President Theodore Roosevelt once described as "my ideal typical American," were founding the town of Belle Fourche, becoming Lawrence County's first sheriff, serving as a U.S. marshal from 1906 to 1915, and acting as the second superintendent of what today is Black Hills National Forest. "Helping establish South Dakota's first state flag says something, not only about Bullock's patriotism, but his influence in government," Wolff said.

Images of the flag (obverse and reverse) can be seen at dakotafreepress.com/2015/10/28/ag-jackley-catches-state-flag-thief-former-gant-employee-to-face-charges/.