The flag of Dallas is described in the amended ordinance of adoption:

The official flag of the City of Dallas is an emblem of four sides, and four angles of ninety degrees each. The background or field shall consist of two stripes or bars of equal size, the upper stripe or upper bar being red in color and the lower stripe or bar being blue. The two stripes or bars shall be separated in the center by a small white bar or line. There shall be superimposed upon this field a white star of five points, three points of which rest in the red bar; the top point rests in a vertical line drawn through the exact center of the flag. The two lower points of the star rest in the blue bar. In the exact center of the star shall appear the seal of the City of Dallas with a field or background of gold; the detail and lettering in the seal shall be of blue.

The proportions of the elements are carefully delineated in a diagram of the flag. The field is .666 by 1 unit. The star’s top point is exactly in the center of the field, .052 of a unit from the top. Each side of the star’s points is .229 of a unit. The seal’s diameter is .220 of a unit.

The seal has two concentric outer rings enclosing CITY OF DALLAS curved clockwise, above, and TEXAS, curved counterclockwise, below. An interior ring of 44 dots encloses a large five-pointed star, within which is a smaller five-pointed star subdivided into ten sections giving it a three-dimensional appearance.
John M. Purcell, American City Flags, Raven 9-10, 2002-2003

The red, white, and blue of the flag reflect the colors of both the Texas state flag and the flag of the United States. The single star for Texas’ nickname, “The Lone Star State”, is characteristic of many Texan city flags.
John M. Purcell, American City Flags, Raven 9-10, 2002-2003

The ordinance of adoption originally included two adjectives describing the colors as “blood” red and “azure” blue that were subsequently omitted in the later amendment. The flag’s colors are now a dark red and dark blue. The ordinance of adoption also specifies 25 regulations on the display of the flag, as well as a section providing for prosecution as a misdemeanor if some of these rules are violated or the flag is desecrated willfully, provisions very unusual for civic flags.
John M. Purcell, American City Flags, Raven 9-10, 2002-2003

A former flag of Dallas, Texas (1916-1967), shows a silhouette of the state of Texas in white with the name "Dallas" and a small star marking its location on a field of red and blue divided horizontally. This flag was adopted in 1916, though it was not actually produced until 1954. It was used until the current flag was adopted in 1967.

It has been hiding in plain sight for as long as its (now-former) owner can remember, hanging in her booth in a Lakewood antique store - a stained, faded, threadbare pennant passed over and over and over by customers who didn't even think it worth a lousy 15 bucks. "There's no telling where or when I picked it up," Lu Smith said Wednesday when I called to ask a few more questions about my weekend purchase.
Smith, a collector of Dallas antiques for decades, has a spot at Curiosities in Lakewood from which she sells her homegrown antiques: ashtrays and staplers branded with the monikers of long-gone businesses, decades-old maps, Dallas Railway & Terminal Co. trolley tokens (well, until I bought them all), and other museum-quality Dallas-related ephemera. You might also know her as the former owner of and genial host at the Inwood Lounge. I was browsing her booth Saturday in search of Christmas gifts when my 13-year-old son pointed out the blue pennant decorated with a white state of Texas and red "DALLAS" lettering. It was partially obscured by a silky white Texas Sesquicentennial scarf.

The pennant looked mighty familiar. "I bought it someplace in Dallas County - a flea market, probably," Smith said. "I'd love to make up a big fat lie." She laughed. "But that's your job."

Well, maybe that'll have to do. Because best guess is, the pennant's 80 years old, and it's based on a century-old design. Anyone associated with it is long gone.


Dallas' long-lost official flag, designed in 1916 by Jane Malone and forgotten about for a century. (Irwin Thompson/Staff Photographer)

And as far as Dallas' official archivist is concerned, this is the only one in existence. "I don't know of any other one," John Slate said Wednesday. "I've never even talked to anybody about it."
Last year, you may recall, engineer Dallas May tried to persuade the City Council to swap out the city's tired-looking official flag, adopted in 1967, for his new design - a Pegasus floating above three wavy blue lines meant to represent the Trinity River. May told the council in December 2015 that our current offering "does not inspire the kind of love and admiration because the seal on it is really a symbol of authority and not inclusiveness. ... It's a symbol for Dallas City Hall and not the people."
Fair enough. The current flag's a bit staid and stale. But I never thought May's design was the answer, either - mostly since May's flag would probably come with a cease-and-desist from Exxon Mobil, whose lawyers went after tiny Oak Cliff comic shop Red Pegasus back in July for using the company icon trademarked back in 1911. The flying red horse might be Dallas' symbol, of sorts, but only because a company planted it on top of downtown's first skyscraper in 1934.
In the midst of last year's smallish brouhaha over the city's flag, I'd read a couple of decades-old accounts mentioning a century-old original, which was designed by a young woman named Jane Malone, a commercial designer who'd attended the Aunspaugh Art School here and Columbia University in New York. Sometime between 1914 and '16, Malone entered a design contest held by the Evening Journal, this newspaper's afternoon publication, and received $25 when her design was chosen by the Dallas Society for Municipal Research on March 10, 1916. Ten days later, it was adopted as the official city flag by the city commissioners, as reported in The Dallas Evening Journal on March 11, 1916.
Last year, John Slate sent me a Dallas Times Herald clipping from 1966 featuring what was believed to be the Malone-designed flag, which was discovered lying around City Hall only after a citizen had complained that Dallas didn't even have an official flag. But in that photo, and another from a 50-year-old city brochure titled "Dallas Banner," the font was different - plain, sans serif. And the pennant was silk and decorated with fringe. Turns out, that flag was from 1954 and came from the SMU student body. It was presented as a gift, then, apparently, tossed aside.
The pennant hanging in Lu Smith's jampacked antiques booth looked closer to what could have been the real thing, like something that might have been designed a century ago. When I got home Saturday, I sent it to Slate with a note: "Look familiar?" He responded the next day. "Wow, that's it!" he wrote. "I think the news clipping is plenty of proof." He attached a short piece from The Dallas Journal dated May 22, 1935, which said that the city was considering flying its official city flag during Texas Centennial celebrations set to take place the following year. It also noted that most folks had no idea Dallas even had an official city flag. "Although the design was adopted in 1916, the records do not show that a single ensign was ever made," read the item. "The design has hung on the wall of City Secretary Earl Goforth's office since the Commission under Mayor Henry D. Lindsley officially accepted it as the municipal banner." A rendering of the flag ran with the story - in black and white, of course. It looks precisely like the one I bought Saturday. Jane Malone's flag. "I don't have any doubt about that," Slate said when I asked him about it Wednesday. "It's the only one I've ever seen. For all I know, you may have the only one." That's because, according to an Aug. 16, 1966, Dallas Morning News story, "not a single flag was ever made" for the Texas Centennial, despite that old story from the Journal. Wrote Joe Dealey Jr., the official design was yet again forgotten, discarded.
By 1967, we had a new one. The one we have today. The boring one. Now, finally, we have the real thing. In living color.
I sent a photo of The Real Malone to Ted Kaye, who wrote the flag-design guide Good Flag, Bad Flag, serves as editor of American City Flags and is easily the most famous member of the North American Vexillological Association - The Expert, in other words. Kaye has a soft spot for May's offering, which appears in the brand-new issue of The Vexilloid Tabloid. "That's a nice little banner that Dallas adopted in 1916," he wrote back. He then evaluated it according to the five basic principles of flag design, as spelled out in Good Flag, Bad Flag:

"It scores high in Simplicity (bold, clear design), Symbolism (Texas, star, location of star, colors of state flag), Colors (just three) and Distinctiveness (the swallow-tail pennant is unusual, no other flag looks like it)," he wrote. "It only scores low on No Lettering or Seals (with 'Dallas' prominently written).
"But I like to say that in every bad design, there's a good design trying to get out," he wrote. "Removing the 'Dallas' inscription, and perhaps enlarging the star, would improve the design. In fact, it would surpass the current flag, which suffers from the use of the city seal."

So we have a winner. The same winner we chose - and discarded - a century ago. So let's make this happen, Dallas. I've got a flag just waiting to be flown. Has your name all over it.

The flag would be something like: A blue 3:7 pennant with a 90 degree split, with on that blue field the name "DALLAS" in a red, serif font, stretching across a white silhouette of Texas. The text may be intended to be as wide as the flag is high, and reaching half way on the flag.
Peter Hans van den Muijzenberg, 22 December 2016

The DART Police Department flag features the department's badge centered on a blue field. The entire flag is surrounded by a yellow border. Arched above the centered badge are the words "DART POLICE" in yellow serif letters, while the word "DEPARTMENT" appears below the badge in identical letters. Letters on either side of the badge spell out "EST. 1989."
Randy Young, 16 September 2014

The DFW airport has had at least two flags with the current and previous logo: 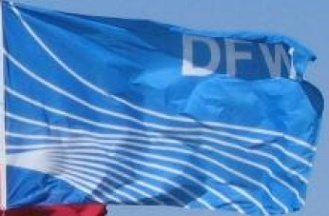 The franchise was established in 1961 as the Washington Senators, an expansion team awarded to Washington, D.C., after the city's first ballclub, the original Washington Senators, moved to Minnesota and became the Twins. After the 1971 season, the new Senators moved to Arlington, Texas, and debuted as the Rangers the following spring."
Source: en.wikipedia.org/wiki/Texas_Rangers_(baseball)

Their flag is a blue horizontal flag with the (new) logo (http://en.wikipedia.org/wiki/Texas_Rangers_(baseball)#mediaviewer/File:Texas_Rangers.svg) in the middle, as seen here: 4.bp.blogspot.com/-LGYsTYdDzTI/UyU6AkRt52I/AAAAAAAAR54/OwhCOV0iujg/s1600/DSC05752.JPG (first flag from left to right)  Source: travelsoframblingroses.blogspot.com/2014/03/texas-rangers-vs-colorado-rockies-march.html

Parkland Hospital in Dallas, has a purple flag with a logo on it: https://dmn-dallas-news-prod.cdn.arcpublishing.com
Logo: https://texashealthlawyers.com/wp-content/uploads/2016/10/Parkland_H_White.jpg
Information from Wikipedia: https://en.wikipedia.org/wiki/Parkland_Memorial_Hospital:

Parkland Memorial Hospital is a hospital in Dallas, Texas, United States. It is the main hospital of the Parkland Health & Hospital System and serves as Dallas County's public hospital. It is located within the Southwestern Medical District.
Dave Fowler, 30 January 2020