The field of San Antonio’s flag is divided vertically into blue at the hoist and red at the fly. In the center is a large white five-pointed star on which is the Alamo outlined and detailed in black. The height of the star is nine-tenths the flag’s width; the height of the Alamo is one-fourth the flag’s width.
John M. Purcell, American City Flags, Raven 9-10, 2002-2003

The colors are those of the flags of Texas and the United States. The star also suggests the nickname of Texas, “The Lone Star State”. The Alamo, a fort in San Antonio and the site of an important battle fought on 6 March 1836 by Texans in their war to gain independence from Mexico, symbolizes the city’s role in that struggle.
John M. Purcell, American City Flags, Raven 9-10, 2002-2003

The flag is an updated version of an earlier flag which bore the name of the city and state. Pete Van de Putte, president of Dixie Flag Company, suggested to Mayor Nelson Wolff that more people might fly the flag if it were less expensive, perhaps by eliminating the costly lettering.
Flag adopted: 27 August 1992 (official).
John M. Purcell, American City Flags, Raven 9-10, 2002-2003

The San Antonio flag was changed in 1992. It is vertically blue and red, with a large white star (almost top-to-bottom) in the center upon which is an outline drawing of the Alamo in either black or blue. Much nicer!
Al Kirsch, 20 June 2000

Actually the current flag since 1992 has been around since 1932. However, the flag had the words San Antonio above the Alamo and the word Texas below the Alamo. This was changed in 1992 when NAVA had their yearly conference in San Antonio and informed the City Council that it was a faux pas to use words on a flag. Thus the words were removed. However, flag stores still sell 4"x6" flags of the City of San Antonio with the words on it.
Chris Pinette, 19 June 2000

"The City of San Antonio's official flag was designed in 1935 by William Herring, deputy commander of the Texas Department of United War Veterans. Herring designed the flag for the national convention of the United Spanish War Veterans being held in San Antonio that year. The original design featured the Alamo superimposed in the center of a white Lone Star of Texas. The Lone Star shined from a field of one-half blue, representing loyalty, and one-half crimson red, which represents the blood that courses through the veins of every loyal Texan. Originally, the words "San Antonio" and "Texas" were printed across the top and bottom of the flag.

City commissioners unofficially adopted the flag in 1935 and two copies were made, one for City Hall and the other for the Chamber of Commerce. However, no action was taken to formally adopt the flag's design until 1976. In 1992, the City was informed that it was no longer acceptable to have words on a flag. City Council passed a resolution to alter the flag's design to the more practical design that is used today."

From NAVA's "American City Flags" (Raven 9/10): "Pete Van de Putte, president of Dixie Flag Company, suggested to Mayor Nelson Wolff that more people might fly the flag if it were less expensive, perhaps by eliminating the costly lettering. So a practical consideration led to an aesthetic improvement.
Nathan Lamm, 31 July 2005

Earlier Version of the Flag

The earlier version of the flag had large white block letters curved over the star, with SAN AN on the blue half and TONIO on the red. In the same letters, TEXAS was centered horizontally between the star’s two lower points, with the “X” half on the blue and half on the red field. The flag was presented to city council on 18 April 1935 by the United Spanish-American War Veterans, but not adopted officially until 1976. The depiction of the Alamo is described variously as having been rendered as gray and as silver and gold. The official colors are PMS 286 (blue) and PMS 200 (red).
John M. Purcell, American City Flags, Raven 9-10, 2002-2003

San Antonio’s first official flag was adopted on 25 January 1917. The flag has a white field with a large blue silhouette map of Texas in its center and SAN ANTONIO in large white block letters across the center portion of the state. Below the city’s name is the Alamo, in a buff color and marking the geographical location of San Antonio. The flag is 48 by 65 inches and its designer was Arthur Storms, a Shriner from the Alzafar Temple. The Shriners (a social and philanthropic men’s organization) used the flag regularly at their national conventions in various cities for many years, but as time went by it was all but forgotten at city hall, even though it apparently was the official city flag until 1976.

The municipal flag was designed by Arthur Storms, captain of the panel of Alzafar Temple. Upon a background of white is seen a map of the state of Texas in blue. The Alamo is depicted in white, with the words "San Antonio," also in white. Mr. Storms outlined his idea to Herbert Bernard, artist, who drew the flag. The one to be presented to the city officials and to fly at city hall will be 65 by 48 inches. 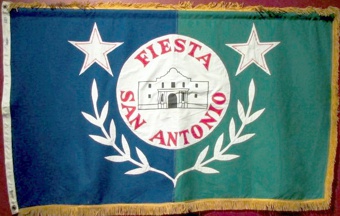 Vertically divided blue and green with the logo centered.

"Fiesta San Antonio" (or simply "Fiesta") (English: Festival) is an annual festival held in April in San Antonio, Texas, and is the city's signature event (along with some events held in the following surrounding cities: Boerne, Schertz, Windcrest, Balcones Heights, and Alamo Heights) since the late 19th century. The festival began as a single event to honor the memory of the Battle of the Alamo (February 23 – March 6, 1836) and the Battle of San Jacinto (April 21, 1836).

In 1891 a group of citizens decided to honor the heroes of the Alamo and Battle of San Jacinto with a Battle of Flowers. The first parade had horse-drawn carriages, bicycles decorated with fresh flowers and floats carrying children dressed as flowers. The Belknap Rifles represented the military. The participants pelted each other with blossoms. The Battle of Flowers Parade is the only one in the country to be planned and directed completely by women. Today it’s the largest parade in Fiesta. It’s second in size nationally only to the Tournament of Roses Parade (see message #217870).

With the immediate popularity of the “grandmother” of Fiesta events—the Battle of Flowers Parade—and other early activities, Fiesta soon needed someone to coordinate the festival. The Spring Carnival Association was established in 1906 to organize the festival. Some years later the Fiesta San Jacinto Association took over Fiesta responsibilities. In the 1950s dissatisfaction grew among many Fiesta organizations over Fiesta San Jacinto Association operations. In 1959 those groups withdrew from the association and formed a new one—the Fiesta® San Antonio Commission.

The commission is led by a volunteer committee that includes members of Fiesta organizations and community leaders. It has a small full-time staff, seasonal employees and volunteers. The commission provides funds for Fiesta events that are not financially self-supporting. The organization itself is funded entirely by the private sector and receives no direct city or other public funding. It relies heavily on membership dues, corporate partnerships, carnival income and licensed merchandise sales. The commission is an independent nonprofit organization."
Sources: https://www.fiesta-sa.org/about-fiesta-san-antonio,
https://www.fiesta-sa.org/history-of-fiesta and
https://en.wikipedia.org/wiki/Fiesta_San_Antonio

The image of the flag is from http://sachartermoms.com/wp-content/uploads/2014/05/witte_fiesta_san_antonio_flag.jpg (source: http://sachartermoms.com/2014/05/13/summer-escape-fairytale-fiesta-exhibit-at-the-witte-museum/witte_fiesta_san_antonio_flag). It is a horizontal flag, split into two vertical stripes, left being blue, and right being green. It is surrounded by a golden fringe. In the middle, a bit to the upper edge, there's a circular white background logo with the Alamo fort in black outline. Below the logo, there are two white laurel branches, one on each side, and on top, a five-pointed white star with an inner red fringe. The flag is the official Fiesta San Antonio flag.