This is the flag of Arlington County located in northern Virginia, bordering on the District of Columbia, and contains the city of Arlington. The flag is yellow with the county seal in the center.

Here's some information that was sent to me by an official of the Arlington County government:

"The house symbolized in the circle is the Custis-Lee Mansion, located in Arlington Cemetery, which was originally the property of Robert E. Lee. It is also known as Arlington House. In the design, Arlington House is surrounded by dogwoods blossoms. As I'm sure you know, the dogwood is Virginia's state flower."

The flag was adopted in 1983. Designed by Mr. Wilcox, Deputy General Council, depart. of the navy. Central emblem is a stylized representation of the Arlington House. Leaves are in blue to prevent using a fourth color (the colors are yellow, blue and white).
source: Nava News
Jaume Ollé, 7 January 2001 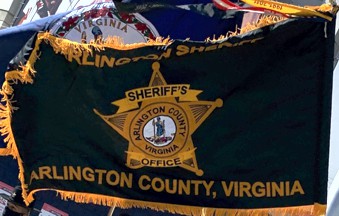 Image of the flag of the Arlington County Sheriff’s Office obtained from https://www.facebook.com/ArlingtonVASheriff/photos/5434864339918160
Paul Bassinson, 9 May 2021

While researching, I came across the flag of the county's fire department. Photographs of an awards ceremony in 2012 contained the flag www.arlingtonmagazine.com/March-April-2012/Thirtieth-Annual-Valor-Awards.

The flag of the Arlington County Fire Department has a white field with the department's logo displayed in the center in dark blue and gold. Above the logo are the words "ARLINGTON COUNTY" in red sans serif letters, with the words "FIRE DEPARTMENT" below the logo in similar lettering.