From http://livepublish.municode.com (no longer available):

Sec. 1-8. Corporate seal of city; execution of bonds, etc.
(a) The corporate seal of the city shall be a circle 1 3/4 inches in diameter, and just inside the outer rim of the circle the words "SALEM, VIRGINIA" with the design of a dove of peace carrying an olive branch in the center. On a flag, such seal shall be centered on a field of white with the dove of peace, circle and the words "Salem, Virginia" in gold against a background of royal blue.
(Code 1969, § 1-6)

Charter references: Authority of city with reference to corporate seal, § 1.1.
Image of the seal at www.ci.salem.va.us/images/city_seal2.gif and available here.
located by Dov Gutterman, 11 December 2002

Salem's official website has the complete "Branding & Logos" (https://salemva.gov/Departments/Communications-Office/Branding-Logos). In that webpage, titled "City of Salem Logos", some considerations and observations are provided, as follows:

"Below are official logos used by the City of Salem available for download. Any other logo requests should be sent to the Communications Department by email or calling (540) 375-4112.

The City of Salem seal is used on official documents, vehicles, buildings and road signage. The seal can be used to represent Salem on any documents or advertising both inside and outside the city. This logo should not be altered in any way.

The City of Salem bar logo is a more modern version the city uses on official documents, website, department logos and more. This logo can also be used to represent Salem on any documents or advertising both inside and outside the city and should not be altered in any way." 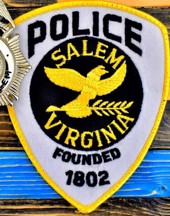 Salem's Police Department seems to have a ceremonial (outdoor variant) flag, featuring the coat of arms of the Department. In fact, when looking at the uniform patch, one can see that it is the color combination black background and golden bird.

Regarding the fonts and typeface, they are:
- Trajan Pro, a Roman style font, is used on the Salem City Seal and Salem VA bar logos. It is to only be used in headlines or display copy, due to all letters being capitalized.
- Lato Regular, a Google-based font, is the city’s primary typeface. It’s a clean, modern sans-serif typeface that works well for display copy, body text, and everything between.